Should I Eat Sushi?

You now have the blessing of five health experts to eat sushi—but there are some things you should know before ordering.

“Sushi is a nice and healthy meal if you make the right choices,” says Sunniva Hoel, a PhD candidate at Sør-Trøndelag University College in Norway. It comes with all the health benefits you’d expect from fish, like omega-3 fatty acids and lean protein, but the problem is often what it’s wrapped in. “Maki and nigiri sushi mainly consist of rice, which is just fast carbohydrates,” she says. Eating sashimi, slices of raw fish accessorized with vegetables, is the better way to order.

It should be noted, too, that sushi is raw, so people with immune deficiency, like the elderly or chronically ill, and pregnant women should take care when eating foods that haven’t been heat-treated, she says. “Raw fish can transmit infectious diseases,” adds Dr. David Katz, director of the Yale University Prevention Research Center, “so you need to choose a very well-run establishment.”

Store-bought sushi might face even more of a quality challenge than the kind you eat at a restaurant, since its longer shelf life gives bacteria more of an opportunity to flourish, Hoel says. A study by Hoel and her colleagues found that almost half of the 58 samples of supermarket sushi they sampled had unsatisfactory levels of bacteria. “The main concern is to maintain an unbroken cold chain during production, distribution, and display in stores and all the way to the consumer’s tables,” she says.

Needless to say, rolls that are deep-fried and smothered with mayo are less healthy choices, says Kristin Kirkpatrick, RD, manager of wellness nutrition services at Cleveland Clinic Wellness Institute. She tells her patients to focus on lean sources of fresh fatty fish, get plenty of sea vegetables and wrap it in brown rice, or no wrap at all. “If that’s how you approach a night at the sushi bar, then a portioned controlled thumbs up to you,” she says.

Mercury is still a concern with sushi, says Roxanne Karimi, PhD,  School of Marine and Atmospheric Sciences at Stony Brook University . Her research on mercury found that blood mercury levels were positively associated with eating a weekly tuna steak or sushi. But small-bodied fish lower on the food chain have less of it, she says.

Those lesser-known fish lower on the food chain are often the best ones to pick for sustainability, too, says Tim Fitzgerald, director of impact in the oceans program at the Environmental Defense Fund. “The sushi market in general is much more opaque than the larger seafood market,” he says. Unfortunately, three of the most popular items—tuna, salmon and shrimp—aren’t often fished or farmed sustainably, he says.

Opt instead for things with two shells, like scallops, clams and oysters. Roe—fish eggs—are a good choice too and have some of the highest omega-3 levels of any food per volume, Fitzgerald says. Other sustainable options are mackerel and arctic char, which is produced in a much more sustainable way than farmed salmon sushi, he says. (For more on the best fish to order, check out the Environmental Defense Fund Seafood Selector—complete with a sushi guide.)

Some restaurants, too, are raising the bar: Fitzgerald points to Bamboo Sushi in Portland, OR, Miya’s Sushi in New Haven, CT, and Tataki in San Francisco, CA as pioneers in sushi sustainability.

“You don’t have to give up sushi,” Fitzgerald reiterates. “It’s still good for you: just have a cheat sheet when you go in.”

Read next: Should I Eat Tilapia? 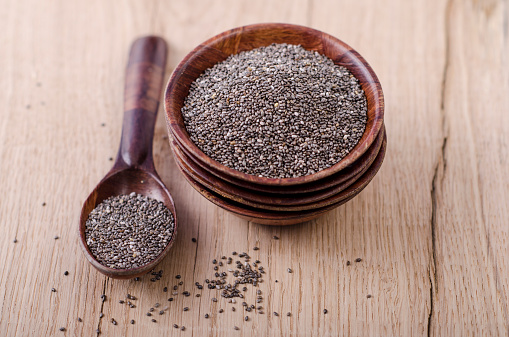 10 Delicious and Healthy Ways to Use Chia Seeds
Next Up: Editor's Pick