Everything You Need to Know About the Halo 5 E3 Demo

Mincing no words, Microsoft led its E3 2015 press conference with Halo 5: Guardians, segueing to in-game footage moments after the curtain came up. The watchword for the demo: scale.

Here’s a breakout of what we saw.

It looks like Halo multiplied by Battlefield wrapped in Jupiter Ascending

Halo‘s looked pretty much like Halo since its inception, so what’s Microsoft doing to make the franchise’s Xbox One debut momentous? Blowing stuff up, as in way up. After the demo’s corridor-crawl through trademark neon-glowy environments crosscut by tracer fire, we caught glimpses of giant screen-crowding enemies, crazy-big spaceships, and cyber-insectoid-thingies I wouldn’t want to have to fight with a whole battalion of Master Chiefs.

Master Chief is in the club, Locke is not

The demo was from Spartan Locke’s perspective, but when Locke ran into a glowering Forerunner enemy, we learned Master Chief is in the game’s mythic skull and crossbones club. Locke? Not so much.

It’s all about cooperative play this time

Instead of player versus player, Microsoft’s hyping this as “player versus everything.” Think 24 players, vehicle, mech and infantry combat, A.I. controlled adversaries, two squads — one led by Master Chief, one led by rival Spartan Locke — and environments four times the size of any previous Halo map. Microsoft calls it a “giant leap” forward for the franchise. 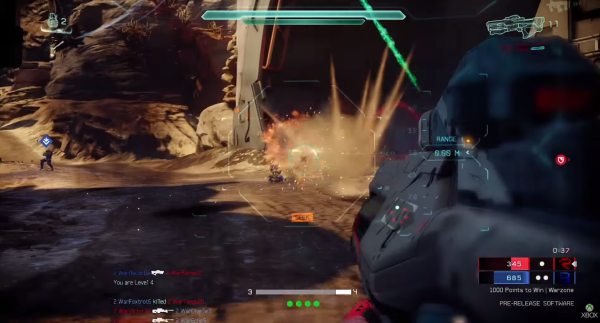 Watch: Halo 5 Has a Crazy New Multiplayer Mode
Next Up: Editor's Pick