The Netflix Inc. application is displayed on an Apple Inc. iPhone arranged for a photograph in Washington, D.C., U.S., on Tuesday, Jan. 21, 2014.
Bloomberg—Bloomberg via Getty Images
By John Patrick Pullen

Science tells us that the dinosaurs lasted almost 200 million years, though if we look it up their lifespan on the Internet Movie Database, it’s documented that Dinosaurs had just a scant four season run. But thanks to DVDs, fans of this pre-historic sitcom can relive the yucks forever.

Well, not really. DVDs are going the way of both the dinosaurs and Dinosaurs, and no one seems all that upset about it. But how can it be that this once highly-touted technology is on track to become as extinct as the 8-track? Hurtling towards the DVD ecosystem like a meteorite, the growing popularity of streaming video services is killing the video disc.

But DVDs’ demise won’t be caused by one cataclysmic event. Here are five reasons that streaming sending discs to the digital graveyard:

Money: Aside from the grocery store bargain bin, when was the last time you actually bought a DVD? Admit it, you can’t remember. According to a recent report from PricewaterhouseCoopers, this year streaming revenues will surpass DVD sales for the first time, and you better believe Hollywood is following the money. So is the electronics industry, as sales of DVD players began declining back in 2006. Since then, devices ranging from gaming consoles to Blu-Ray players have taken their place — the latest, of course, being streaming media boxes like the Roku and Apple TV.

Physical Limitations: As consumers increasingly look to streamline their living room, DVD players and collections have been deemed too big to keep around. With smart televisions touting access to services like Netflix and Hulu Plus, many TV viewers are opting to not have their pristine flat screens look like they’re tethered to an accessory from 2003. And for those rare sets that don’t pack smarts, low-profile dongles like Google’s Chromecast or Amazon’s Fire TV Stick can get them connected to online content for under $40.

Home Videos: In a 2005 requiem for VHS tapes, The Washington Post declared video cassettes dead, commenting how “without it, 29 years’ worth of rainy weekends would have dragged on ceaselessly, movielessly.” That’s a long time for any technology, and VHS likely only lasted that long because of the proliferation of home video cameras that flooded everything from theme parks to school talent shows each year. But DVD-recording never caught on in that same vein, as flash memory-based recorders like the Flipcam (and then the smartphone, of course) took the home video reigns from there. If DVDs would’ve lasted as long as VHS, we’d still be lousy with discs until 2024 at least.

Television Shows: It might be a while before the blockbuster movie you missed comes out on a subscription streaming service — if it ever does. But hot television shows, especially ones from cable networks, are another deal altogether. Big movies first make money for studios in the theaters, then in movie sales (whether it’s on disc or download), and next in the video rental circuit. By the time they’re ready to stream, they typically anchor a collection of other movies, most of which aren’t very good. So, for example, for every Marvel Avengers movie Netflix gets, it also gets some straight-to-video schlock, too.

Television shows, meanwhile, have found great success going straight to streaming a season or so after airtime, getting more eyeballs (and potentially pulling in new viewers to its current season) and demanding higher fees while their social currency is high. For instance, what would you rather watch right now, The Sopranos or Mad Men? But notably absent from the television show timeline is DVD sales, because who wants to pay $40 for a season when you can get the same thing with your Amazon Prime membership?

Time: Nothing lasts forever, not The Wire, and not even movies burned onto DVDs. According to the National Archives, recorded DVDs are documented to live as long as 25 years or more, but in reality they only last about two to five years. Manufactured DVDs are another story — their lives vary wildly. For instance, the average Lego Movie survives about two weeks in a household with children under the age of 12 (just kidding!). But streaming services don’t scratch, skip, or warp, and for less than the cost of a movie, consumers get a much larger library to choose from. It’s a no-brainer of a deal, and one that more people are choosing as time goes on. Then again, some don’t have a choice. For instance, if you want to watch The Simpsons in the future, you’re going to need to download an app. D’oh! 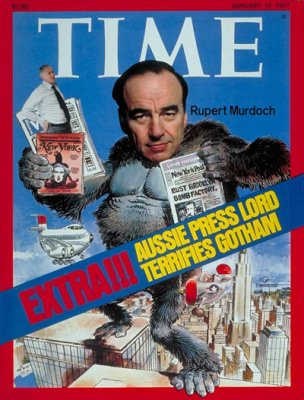 How Rupert Murdoch First Got Into the Media Business
Next Up: Editor's Pick