7 Things to Know About the Magna Carta

For legal scholars, constitutional enthusiasts, and the United Kingdom, Monday is a special day: it’s the 800th anniversary of the signing of the Magna Carta.

A “Great Charter” signed between the King of England and the English nobility in the year 1215, the Magna Carta limited the power of the throne and was the first significant limit placed on governmental authority.

1. King John of England signed the Magna Carta in a field
Under pressure from a group of some forty English barons unhappy with the crown’s excessive taxation, King John agreed to affix his seal to the charter at Runnymede, near Windsor. The site is still a field today, part of National Trust land on the banks of the River Thames.

3. It established due process
In perhaps its most enduring legacy, the Magna Carta mandated that no man be imprisoned, stripped of his possessions or exiled “except by the lawful judgment of his equals or by the law of the land.” Basically, it said the king can’t arbitrarily imprison someone just because he’s in a bad mood. The government must act according to its own laws. That was a huge step toward establishing the modern legal and justice system. In 1297, the charter was counted as part of England’s statute law, and it’s now seen as the basis for the American Constitution and Bill of Rights.

4. But it didn’t last long
King John had the Magna Carta annulled by the Vatican within a few months of its signing, and the rebellious barons excommunicated by the church. When Henry III reissued the document ten years later, he whittled it down to 27 clauses from 69 — and today, just three of its original clauses remain part of English law

6. The U.K. will be drinking to its memory nonetheless
Among other things, the Magna Carta created the standard pint of ale. One of the rights the barons required was that ale was sold in bulk at a standard measurement. The idea of the provision, which also covered wine, corn and cloth, was to stop merchants from short-changing customers by selling goods smaller than they appeared. In the Middle Ages, the standard drink size was the London quarter, the equivalent of two pints.

7. While Americans will be celebrating it too
Five hundred lawyers from the American Bar Association are attending today’s Magna Carta signing celebration in England — just the latest proof of the high esteem in which the document is held in the U.S. Chief Justice John Roberts even cited the charter in a Supreme Court decision, saying that a legal ban on judges asking for campaign contributions is a “principle [that] dates back at least eight centuries to Magna Carta.” And the New Hampshire legislature once tried to require any new legislation dealing with individual rights to include a direct quote from the Magna Carta. We even have our own copy of it; a U.S. billionaire bought a later version of the Magna Carta in 2007 for some $21 million and put it on permanent loan in the National Archives, where it can be publicly seen on display. 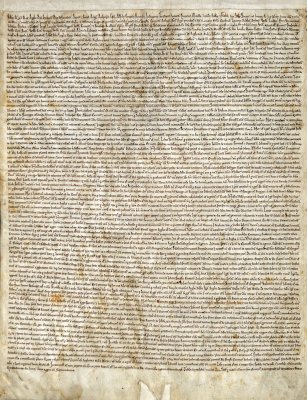