Warning: Major spoilers from the Game of Thrones season 5 finale ahead.

As all leaders eventually learn, sometimes making the right decision for the greater good can backfire. So it was for Jon Snow, who at the end of the season five Game of Thrones finale gets stabbed to death by the very men sworn to follow his command at Castle Black.

Snow’s decision to allow Wildlings inside the Wall to protect them and add troops to the ranks fighting off the White Walkers was very unpopular among the Night’s Watch. Their revenge against him amounts to the demise of one of the show’s most beloved characters—as upsetting to fans as the demise of his father Ned Stark, half-brother Robb Stark and sort-of stepmother Catelyn Stark.

Some viewers took to social media to speculate that seeing him bleed out in the snow might not amount to proof of death—after all, Melisandre arrived back at the wall only hours before his stabbing, and her powers could prove helpful. Yet actor Kit Harington told Entertainment Weekly in no uncertain terms, “I’ve been told I’m dead. I’m dead. I’m not coming back next season.”

But then again, maybe there’s a chance he’s clueless—as a wise woman once said, “You know nothing, Jon Snow.” 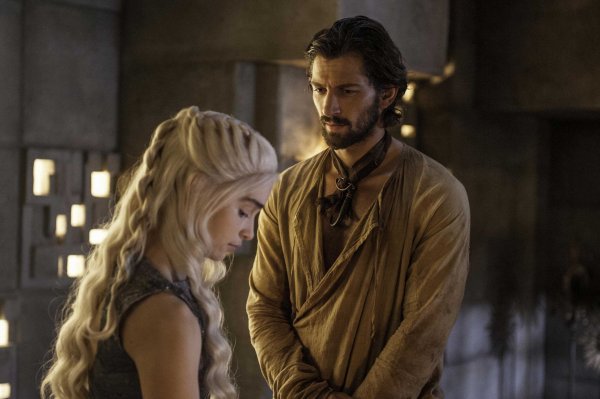 Game of Thrones Star on That Shocking Death: 'I'm Not Coming Back'
Next Up: Editor's Pick