Game of Thrones Watch: It's Always Your Own People

It really shouldn’t be a surprise at this point when Game of Thrones offs a major character. Offing major characters is Game of Thrones‘ thing. But the show has never done one quite like this. Historically, these sorts of deaths haven’t been the last thing viewers see before waiting 40 weeks for their next fix. For obvious reasons, however, showrunners David Benioff and Dan Weiss want the image of poor Jon Snow laying dead in a pool of his own blood seared into fans’ minds until the series returns next April.

Many of the reasons Snow’s death is sad are obvious. Yes, he was a genuine, honest-to-god protagonist in a show that has always been short on them. Yes, he was a good man on a show where good men have a lifespan shorter than a Baratheon bannerman. And yes, he was the perhaps the only living man in Westeros even somewhat capable of preventing the White Walkers from overrunning the entire continent. All of that is true and important and relevant.

But more than that, he seemed like a character truly integral to the many questions and theories the show had yet to explore. Would he finally take up for his half-siblings? Were they even really his half-siblings? Just how can the White Walkers be defeated? We may eventually get answers to the latter two, but it’s difficult to not be disappointed that the Bastard of Winterfell won’t be around to see it.

Ultimately, Jon Snow died as he lived: looking at all the things that were to come without taking a moment to look directly in front of his nose. The writing had been on the Wall for weeks, ever since Jon was voted the new Lord Commander. The vote itself was incredibly divisive, but lopping off Janos Slynt’s head only did so much to consolidate Snow’s power. Lending a bit too much credence to the old “Keep your enemies closer” maxim, he ignored Stannis’ sage advice and let Alliser Thorne stick around rather than sending him out to Eastwatch-by-the-sea.

On its own, that decision might have been fine. Alliser obviously hated Snow but didn’t bat an eye when the newly-minted Lord Commander sentenced Janos to death. The real problem was the break from tradition. Hell, it wasn’t just a break—in the eyes of the sworn brothers of the Night’s Watch, this pampered, entitled bastard who always seemed to think himself superior to those he served with was taking their millennia-old traditions and feeding them to his direwolf (speaking of which, where were you on that one, Ghost?). Like Ned, he believed that doing the right thing was always the right thing to do. For a while, it worked out. It seemed that the fact that Snow wasn’t quite as beholden to concepts like honor and tradition made him more adept at handling the harsh realities both north of the Wall and at Castle Black.

In the end, eschewing a tradition that more or less served as the very foundation of his brotherhood proved a step too far for Jon Snow. He gained the trust and respect of the Wildlings he saved, but allowed those enemies in the Night’s Watch that he was keeping close to get near enough to pierce him with a dagger—repeatedly. And now, barring some minor miracles (always difficult to rule out in the Game of Thrones universe), his watch has ended.

As deflating as Jon’s death was, it wasn’t nearly as difficult to watch as Cersei’s so-called “atonement.” It wouldn’t be a stretch to describe some of the humiliation that the Queen Mother has endured over the last few episodes as “richly deserved,” but the justice that the High Sparrow visited upon her would be excessive for anyone whose name wasn’t “Ramsay Bolton.” Being scrubbed raw and having her signature locks shorn was bad enough, but then being paraded through the streets of King’s Landing completely naked with the citizens hurling epithets, vegetables and feces at her was a fate Cersei likely never imagined when she first teamed up with the High Sparrow. And director David Nutter did everything he could to ensure that viewers felt every moment of it, hardly panning away from Lena Headey for the better part of five minutes.

Cersei kept it together pretty well for much of her march, but was completely broken by the time she reached the Red Keep. Her son—likely wrapped up in a riveting game of yarn ball with Ser Pounce—wasn’t there to greet her. Instead, two of her biggest detractors, Uncle Kevan and Maester Pycelle, were the first two faces she saw (Pycelle in particular seemed amused by her current condition). It was Qyburn who wrapped Cersei in a cloak and assured her that whatever sort of monster he has turned the Mountain into would avenge the wrongs visited upon her. Cersei once told Lord Baelish “Knowledge isn’t power. Power is power.” Well, the Sparrows—along with almost all of King’s Landing—know now of her sins, her shame and her body. Let’s see what good that knowledge does against a eight-foot monster, the Lannister forces and an impossibly vengeful Cersei.

The Queen Mother’s mood is unlikely to improve when she hears of the fate that has (likely) befallen Myrcella. Touching father-daughter talks rarely work out well in the Game of Thrones universe (see: Ned and Arya Stark, Stannis and Shireen Baratheon), so between the heartfelt moment that Jaime and Myrcella shared, and Ellaria’s bizarre smooch on the princess’ lips, tragedy was right around the corner. On the plus side, maybe this will lead to some action next season involving Dorne that can actually live up to Oberyn’s legacy.

Elsewhere in Westeros, we finally got an answer to the question, “How could Stannis Baratheon’s siege of Winterfell possibly go any worse than the Battle of the Blackwater?” Despite the thawing snow, Stannis was dealt a trio of crushing blows, with half his troops deserting, his wife hanging herself and Lady Melisandre scurrying north to Castle Black. Having little else to lose, Stannis pressed on anyway, accomplishing little other than preventing Brienne from staging a rescue attempt for Sansa Stark. Instead, Oathkeeper got to live up to its name and take the head of the last of the Five Kings. One can only hope that it and its owner get to see a little more action next season.

Across the narrow sea, another oath of sorts was kept when Arya finally got to cross a name off her list. Her surgical killing of Ser Meryn Trant could have taught Oberyn a thing or two about how to deal with a larger, stronger combatant. In an episode with little to cheer for (yeah, so what else is new), Arya’s vengeance killing—however gruesome—offered at least some justice in a world that so regularly lacks it. Unfortunately, taking a man away from the Many-Faced God without permission may prove a triumph not worth the cost. It’s hard to say exactly what is happening to Arya as the camera cuts away from her, but her screams—so rarely heard from the youngest Stark daughter—don’t lend much room for optimism.

Providing slightly greater cause for hope is the new Meereenese ruling triumvirate of Tyrion, Grey Worm and Missandei. Perhaps that trio will have better luck subduing the city’s tensions than their Drogon-departed queen. And it can’t hurt to have Varys (having finally concluded his business in that Volantis brothel) back in the fold as well. As for Daenerys, well, it’s hard to imagine that being surrounded by a Dothraki horde will turn out quite as well for her this time as it did the last. But at least she’s still got her life, which is more than another fan favorite can say. Goodbye, Jon Snow. May you know more in the next life than you did in this one. 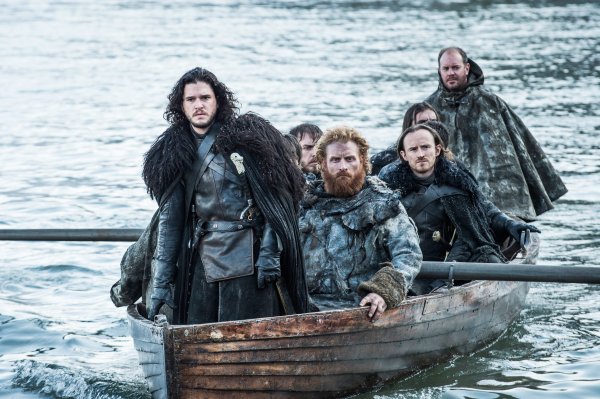 GoT Fans Really Aren't Happy With That Finale
Next Up: Editor's Pick