Former Florida governor Jeb Bush was supposed to assemble the strongest roster of aides and donors, spooking would-be rivals for the Republicans’ presidential nomination from the race.

His political machine was expected to have $100 million on the first day as a declared candidate. Eventually, no one would ask about his family, which has spawned two Presidents, or his support for Common Core education standards or liberal views on illegal immigrants.

None of that has happened.

Bush replaced his campaign manager last week as internal fights spilled into public view. His broader campaign-finance orbit is expected to come up short of the nine-figure war chest it wanted to have at the ready. And he continues to be so dogged about the Bush legacy and tremendous distrust among conservative activists that a third member of the dynasty should live in the White House, he ditched the Bush name altogether in his campaign logo and is going for just “Jeb!”

For others inside the party, they cannot accept his policy positions on education and immigration that fall squarely outside of orthodoxy. As he prepares to formally join the 2016 contest on Monday near Miami, Bush will need to have a better showing than he enjoyed during the lead-up to the launch.

Take, for instance, Bush’s first week of May. He gave the commencement address at evangelical Liberty University and sat down with Fox News anchor Megyn Kelly. During his chat with Kelly, he faced questions about the war in Iraq, launched in 2003 by then President George W. Bush. Asked if he would have gone to war, knowing now that the Iraqi government did not possess weapons of mass destruction, he answered in the affirmative.

His advisers said he misheard the question, he said he didn’t understand it and then he called such queries “hypotheticals.” His rivals piled on while he tried not to criticize his brother or the war that killed 4,491 Americans. Donors started to phone headquarters with advice to the former governor: “Admit you got it wrong and be done with it,” one fundraiser told a Bush adviser. In the span of a week, Bush watched his campaign in waiting deflate.

But Bush’s political machine was built to weather such a beating. Bush started assembling his team last year, tapping longtime adviser Sally Bradshaw as his top lieutenant. She brought together some of the biggest names in the party: media strategist Mike Murphy, Iowa’s most respected operative David Kochel as national campaign manager and a raft of Washington insiders to fill senior jobs. His top aides in New Hampshire are veterans of presidential, Senate and gubernatorial races, and his South Carolina team is about as gold-plated as can be found.

“He has assembled a first-rate team,” said former Massachusetts governor Mitt Romney told reporters at a retreat this weekend in Deer Valley, Utah. “The people around him are experienced and capable. Many of them I know from my own campaigns and I had high regard for.” But they never really fit together with the candidate, who is a demanding yet out-of-practice boss.

As for money, Romney perhaps continued to reinforce expectations that Bush could fail to clear. “I wouldn’t be surprised to hear he raised twice as much as all the others combined,” Romney said. “I think it’s going to be a big number, because he’s worked it very hard.” Aides last week conceded the $100 million goal was not going to happen by Monday’s launch.

Sensing other troubles ahead, Bush and Bradshaw shook up the campaign at the same time. They shifted Kochel to the role of strategist and brought aboard hard-nosed operative Danny Diaz to fill the top job. The campaign portrayed it as a minor tweak. But it was also a public sign that Bush realizes his preannouncement period had gone poorly and he needs a change. If he is to become the third member of his family to call 1600 Pennsylvania Avenue home, he cannot afford a repeat of the past six months. 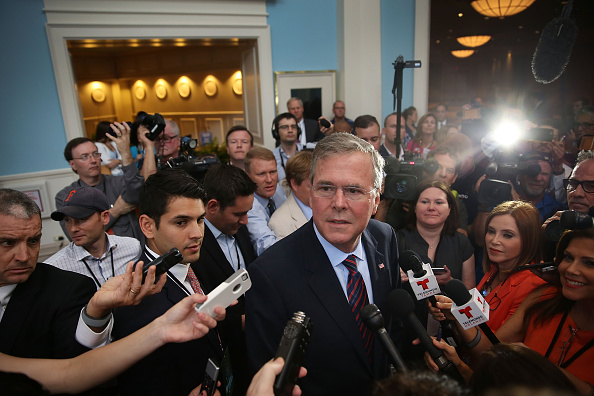