Or so Hillary Clinton’s campaign hopes.

Clinton has spent the first nine weeks of her candidacy getting personal with voters in ways most Americans have never seen. Even as polls show her approval ratings have dropped among voters—an inevitable part of re-entering politics, her aides say—Clinton is weaving her life story into everything she does on the campaign trail, from tales about her upbringing to witty tweets.

She has listened to voters in early primary states talk about their struggles to pay for college or take care of family members with drug addictions. She has snapped dozens of selfies and turned serendipitous neighborhood tours and full-armed embraces with strangers into carefully constructed campaign films.

When she officially launched her campaign on Saturday with her first big rally, Clinton centered her speech around her mother, Dorothy Rodham, who Clinton said is the inspiration for her domestic vision for the country, and her entire bid for the Oval Office.

“My mother taught me that everybody needs a chance and a champion,” Clinton said in the hot, muggy morning on Roosevelt Island in New York City.

Surrounded by a crowd of over 5,000, she told the story of how neighbors and friends showed her mother kindness after she was abandoned by her parents. “That’s why I believe with all my heart in America and in the potential of every American.”

Her mother’s example, Clinton says, is what has brought her to support a laundry list of Democratic policies like establishing universal pre-kindergarten, mandating paid family leave, passing a constitutional amendment to overturn Citizens United, providing relief for indebted college students and rewriting the tax code and eliminating loopholes for large corporations. “I wish my mother could have been with us longer,” Clinton continued. “I wish she could have seen the America we’re going to build together.”

All presidential candidates sing their parents’ praises, kiss babies and put their families on parade. But Clinton’s ritual visits to baby stores to purchase goodies for her infant granddaughter, her cavalcade of knowing social media and her highly publicized roundtable conversations with voters sets her apart from the other candidates, Republican and Democrat. It’s part of an approach to reintroduce Clinton to Americans as aides say she really is: caring, tenacious and witty. It’s also a departure from the sometimes distant approach that characterized the early months of her 2008 Presidential campaign.

“Everybody understands that Hillary Clinton is a fighter, that she doesn’t quit, but we need to explain to people where that comes from for her, what is it that motivates her,” the campaign’s director of communications, Jennifer Palmieri, said on Friday evening before Clinton’s launch. The campaign “will show the person that we know, who is very maternal, very warm and engaging.”

In public speeches and at private fundraisers, Clinton has been joking about the number of time Bill had to ask to marry her, and how she dyes her hair and won’t need to worry about going gray in the White House. Her granddaughter, Clinton says, will get so much attention, nurturing, singing and love that she’ll finally ask to be left alone. According to her Twitter bio, Clinton is a “pantsuit aficionado” and a “hair icon.”

“Hillary Clinton has said she wants this campaign to be fun,” a senior campaign official said. She believes “campaigns can be an exciting, fun endeavor where you and your team put yourselves out there.”

There is also a deeper strategy behind the approach. Polls show that among her biggest challenges is convincing voters after decades on the national stage that she is who she says she is. A CNN poll published early this month showed 57% of Americans do not find Clinton honest and 52% believe she does not care about people like them.

Her allies blame decades of right-wing assaults for tarnishing the Clintons’ image, along with the most recent spate of controversies surrounding the Clinton Foundation and her use of a personal email server, as well as the Begnhazi attacks have set some of the tone for the beginning of her campaign.

Publicly, her aides and allies dismiss the polls, calling them by turns inaccurate and preemptive. “I take these polls with a grain of salt,” Clinton’s top campaign pollster Joel Benenson shot back at bearer of bad news CNN. It’s too early in the race, Clinton’s supporters point out, and she still compares favorably with all the Republicans.

Several of those that have seen and met Clinton since she began her campaign say they find her empathetic and funny. Attendees at her intimate fundraisers say they come away charmed, swooning over her offhand jokes and her savvy grasp of politics. At the launch, enthusiastic followers filed down the Roosevelt Island promenade and gathered by the riverside.

“She’s not afraid to laugh at herself,” said Dorothy Vickery, a 23-year-old freelance video producer. “She can call herself a ‘pantsuit aficionado’ and embrace that people are going to make fun of that. But that’s who she is, and she rocks that.”

The Hillary Clinton of 2015 is different from the candidate many voters saw during the 2008 election cycle, when she spoke about her platform in far less personal terms. Though she drew many followers with her unofficial mantra in 2008, “ready on day one,” and her laser-like focus on the Oval Office, many said at the time that they found her unapproachable.

“We are just now launching the campaign in earnest and the key question in this campaign as it relates to trust is, who can everyday Americans trust to go to bat for them,” her campaign manager, Robby Mook said Friday. “I am absolutely confident when she lays out her case it will be very clear to people that she will be that champion to stand up for them every single day.”

After her speech, Bill and Chelsea joined Hillary circling the crowd, shaking hands. Verna Brooks McKenzie, part of the Jamaican delegation to the United Nations that saw Clinton’s famous 1995 speech in Beijing on women’s rights, stood at the rope line as Chelsea passed. She’s now a U.S. citizen and a health consultant in New York, and says she will vote for Clinton in 2016.

“They’re trying to say, how can she make so much money and know anything about the middle class? But she has lived it,” said Brooks McKenzie. “To me she epitomizes the American Dream. When she spoke about her mother and how she was raised and picked herself up to reach the highest heights that a woman can reach in the world—it’s just awesome and fantastic.” 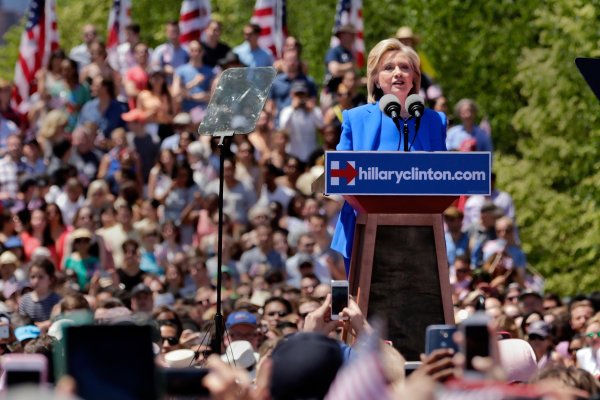