President Obama suffered a stunning defeat Friday when fellow Democrats in the House hobbled his push for a legacy-defining Pacific Rim trade deal.

House Democrats used a tactical maneuver to deny Obama the fast-track negotiating authority he needs to finalize that pact, sinking a worker assistance program that’s become a precondition for Democratic support of such agreements. The vote was 126-302.

The path forward for Obama’s trade agenda, his top legislative priority, is hardly clear. “I don’t think anybody knows,” Rep. Steve Israel (D-N.Y.), a member of House Democratic leadership, said after the vote.

Complicating the outlook, House Republicans managed to eek out a majority for the fast-track power itself following the implosion on the worker assistance funding. But procedural rules prohibit GOP leaders from taking only part of the package, which already passed the Senate, and sending it along to the White House for the president’s signature.

Republicans indicated Friday afternoon that they are looking to bring the legislation back up for another vote early next week, and the Obama administration needs to use the weekend to change scores of minds among the Democratic ranks.

In the meantime, Republican leaders appeared happy to heap blame on the White House for botching a key priority they shared. “The president has not only faded, he’s irrelevant, and he proved it again today,” Rep. Pete Sessions (R-Texas) said.

The setback also marks a humbling blow to the corporate lobby, which marshaled all its muscle — including a multi-million dollar media campaign and a newly organized program to enlist workers’ voices in the debate — to try to overcome a raucous, bruising effort by labor unions to turn Democrats against the White House.

But the loss comes with a personal sting for Obama, considering he launched a rare, last minute blitz to twist arms in his own ranks. He made an unannounced appearance at Nationals Park baseball stadium on Thursday night to buttonhole lawmakers there for an annual Congressional game, and then he trekked up to the Capitol on Friday morning to make a final appeal to Democrats in a closed-door meeting.

The program that Democrats voted down — officially, Trade Adjustment Assistance — provides extended unemployment benefits and job retraining for workers laid off as a result of expanded trade. Most Republicans view it as welfare and oppose it. But with the trade agenda’s fate hinging on the worker assistance funding, the National Association of Manufacturers and the U.S. Chamber of Commerce — two of the most powerful business lobbies, both of which typically lean right — put lawmakers on notice that groups will be factoring how they voted into the scorecards they use to determine their election-season support.

The pressure evidently didn’t change many minds, though it highlighted again how the odd politics of the issue scramble traditional allegiances. That dynamic was on display Friday morning in the subterranean room in the Capitol Visitors Center where Obama delivered a final appeal to House Democrats. The president made an impassioned case that the economic benefits of his trade program will be widely shared, attendees said, and he argued that his record of sticking up for working families should earn him some good faith from members of his own party. But walking out, Obama telegraphed to reporters that he knew he hadn’t closed the sale. “I don’t think you ever nail anything down around here. It’s always moving,” he said.

For one, the president undercut his cause by appearing to question the integrity of Democrats who’d line up against a worker assistance program they otherwise support to take down the broader package. “There were a number of us who were insulted by the approach,” Rep. Peter DeFazio (D-Ore.) told reporters after the meeting. “He said you’re not playing it straight if you vote against TAA but you supported in the past and you’ll support it in the future. That’s questioning someone’s integrity. We’re legislators, and it’s the only legislative tool we have to stop something that is otherwise inevitable.”

Likewise, Rep. Brad Sherman (D-Calif.) said he didn’t consider the Democratic move a legislative maneuver, “but even if it was, we engage in legislative maneuvers all the time.” One giveaway about the stakes, he said: “Every lobbyist here in Washington whose job it is to increase profits is for this deal. And every lobbyist in town whose job it is to increase wages is against this deal.”

Democratic objections run deep, a fact that may make it impossible for the White House to salvage the package in just a few days. Rep. Sander Levin (D-Mich.)—the top Democrat on the Ways and Means Committee, which overseas trade—stood off the House floor on Friday afternoon surrounded by reporters and ran through a litany of substantive problems with the Trans Pacific Partnership, the 12-nation pact that Obama wants the negotiating ability to finalize. Fast-track authority would allow him to wrap up the deal and submit it to Congress for a simple up-or-down vote, meaning lawmakers would not be able to amend it. Levin said from what he’s seen of the trade deal’s language, the administration has retreated from some critical priorities—and he views the wrangling over the negotiating package as leverage to force the administration’s hand on those matters.

Wherever the debate leads, the collapse of the administration’s agenda at the hands of its erstwhile Congressional foot soldiers was historic. Compounding Obama’s abasement, House Minority Leader Nancy Pelosi—a typically reliable lieutenant — remained publicly uncommitted in the weeks leading up the vote only to announce her opposition on the House floor moments before it began. “Our people would rather have a job than trade adjustment assistance,” she said. “Today, we have an opportunity to slow down.” 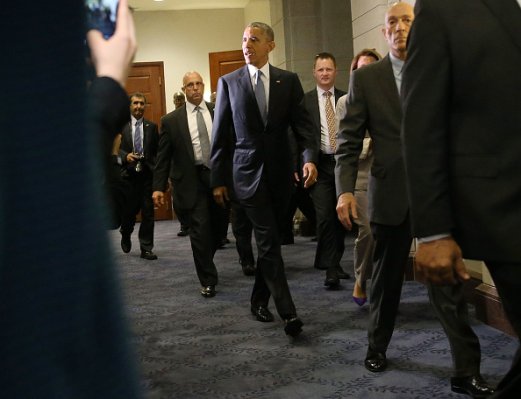