The White House cast an embarrassing setback on a trade deal as little more than a “procedural snafu” Friday afternoon.

After a last-minute revolt by House Democrats, a carefully planned set of votes to give President Obama the authority to finalize the Trans-Pacific Partnership and help any American workers harmed by it failed to play out as the White House had hoped.

That left the trade deal in an uncomfortable limbo. The measure to give Obama trade authority narrowly passed with the support of Republicans, but it cannot go to the White House since Democrats withheld their support on the separate measure.

He argued that the votes showed a “bipartisan majority in the House of Representatives” that backs Obama on the trade effort, noting that 28 Democrats voted for the trade powers.

And he said that Obama would not stop aggressively courting Democrats, including House Minority Leader Nancy Pelosi, to support the deal. The House will meet again on Monday and could make another attempt to approve both parts of the trade deal early next week.

“The President is determined, as was evident in visit to to Capitol Hill this morning, to build a bipartisan majority to make sure that we’re living up to our commitment as Democrats to fight for the middle class,” Earnest said.

“We’re not done with this yet,” he said.

In a statement Friday afternoon, President Obama framed the day’s votes in a positive way, thanking a “bipartisan group of Representatives” for coming together “on behalf of America’s workers, our businesses, and our economy.”

Obama also urged the Republican-led House to pass the measure that would provide aid to American workers that Democrats scuttled in an effort to derail the entire deal. Inaction on trade adjustment authority, Obama said, would be felt by “about 100,000 workers and their communities annually if those Members of Congress don’t reconsider.”

“I urge the House of Representatives to pass TAA as soon as possible, so I can sign them both, and give our workers and businesses even more wind at their backs to do what they do best: imagine, invent, build, and sell goods Made in America to the rest of the world,” Obama said. 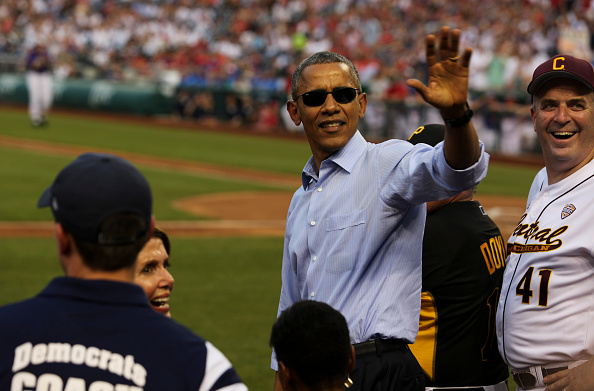