Fairgoers over the age of 18 are invited to drop one piece of corn into one of 14 jars with photos of their favorite Republican presidential candidate during the second day of the Iowa State Fair ahead of the Iowa Straw Poll on Aug. 12, 2011 in Des Moines, Iowa.
Chip Somodevilla—Getty Images
By Philip Elliott

The Iowa Straw Poll that measured the intensity of the state’s most conservative activists and their love of free ice cream—and little else—was declared dead Friday at the age of 36. The cause of death was irrelevance.

Long criticized as a political circus that awards candidates who were willing to pander to the GOP’s extremist corner, the Straw Poll had been at risk for months. The Republican Party of Iowa tried to resuscitate an institution that, in the words of Iowa’s Republican Governor, “had outlived its usefulness.”

Members of Iowa’s central committee offered the Straw Poll life support: they ended the pay-to-play nature of the event, offered candidates free tent space and utilities if they would just show up for the Aug. 8 event in Boone and allowed food trucks to come onto the property so guests were not drawn to a candidate’s camp just to get a meal. Yes, they acknowledged, the Straw Poll had only once picked the Republican who would go on to win the party’s nominee, but it’s been a tradition since 1979. Now, it joins other traditions that have expired, such as voting at midnight at New Hampshire’s Balsam’s Resort or South Carolina’s primary being a must-win for Republicans.

“I’ve said since December that we would only hold a Straw Poll if the candidates wanted one, and this year that is just not the case,” Iowa GOP Chairman Jeff Kaufmann said in a statement, announcing there would be no long lines for candidate-supplied Dairy Queen soft serve or Famous Dave’s pulled pork sandwiches that were a go-to in previous confabs. “This step, while extremely distasteful for those of us who love the Straw Poll, is necessary to strengthen our first-in-the-nation status and ensure our future nominee has the best chance possible to take back the White House in 2016.”

Iowa still holds the leadoff caucuses, scheduled this time for Feb. 1, 2016. But many candidates are also keeping the state at arm’s length. Iowans demand candidates spend an inordinate amount of time answering their questions, eating their farm’s corn and shuffling through dusty fairgrounds. Conservatives are also quick to criticize candidates, as was the case last week when a gun rights activist confronted Sen. Lindsey Graham at a town hall-style meeting. On the American Conservative Union’s 1-to-100 scorecard, Graham has a lifetime score of 87. Yet he drew a heckler for a procedural vote. A day later, Graham again dismissed the Straw Poll. “It’s not a good return on investment for me. I’ll think I’m going to spend my money elsewhere,” Graham said. “I’m going to show up, go to birthday parties, go to weddings, bar mitzvahs—wherever they will have me.”

The daylong carnival-like atmosphere in 2012, held in its traditional spot in Ames, left many in the party publicly groaning and privately plotting its demise. Rep. Michele Bachmann of Minnesota enjoyed her triumph in an air-conditioned tent, cheered as confetti cannons blasted shredded paper over her crowd and country singer Randy Travis performed. She became an instant contender, thanks to the 4,823 participants who cast their ballot for Bachmann. Five months later, 6,064 Iowans caucused for her—a distant sixth place. Establishment-minded Republicans sighed that Bachmann drew the focus from Mitt Romney, 2012’s eventual nominee who chose to skip the Straw Poll and its vote-buying-by-another-name altogether.

Sen. Joni Ernst last week half-heartedly defending her home state’s $30-per-person Straw Poll at her own rally in Boone. “We really want the grassroots activists to come and out vote on who they want to see as their candidate,” Ernst said, standing at the site where the Straw Poll was to be held. Asked what would happen if candidates skipped, she shrugged. “It’s not disqualifying.”

Even as she was defending the institution, it was clear that many members of the top-tier contenders were planning to skip. Wisconsin Gov. Scott Walker, who is atop the polls in Iowa, refused to pledge to participate in the melee. Former Arkansas Gov. Mike Huckabee, who used a second-place finish during the 2008 campaign to give his spendthrift bid a boost, said he would skip the Boone afternoon, too. For many there was only a downside: Former Minnesota Gov. Tim Pawlenty ended his bid the day after a third-place finish during the 2012 race; Kansas Sen. Sam Brownback placed third in the Straw Poll during his 2008 bid and never recovered. This year’s candidates such as Walker, Huckabee and even former Pennsylvania Sen. Rick Santorum can only lose if they come short of expectations.

In its ideal format, the Straw Poll gave lesser-known candidates like Huckabee a shot on the national stage. But in practice, the event rewarded heavy spending; Romney won the 2007 edition after spending millions, only to have Huckabee’s insurgence win the headlines. Four years later, he followed the model set by John McCain’s 2008 bid for the nomination and kept away. Iowans didn’t punish him and gave him essentially a tie for the top spot when it came time to caucus.

Indeed, only once had the clear winner of the Straw Poll gone on to win the GOP nomination. Sens. Bob Dole and Phil Gramm tied at the Straw Poll on the road to the 1996 nomination; Dole won the nomination. And, really, only a member of the Bush clan has ever been both the clear winner of the Straw Poll and the Iowa Caucuses. George W. Bush, of course, in 2000. His father, George H.W. Bush won the inaugural Straw Poll in 1979 and the 1980 Iowa Caucuses. He lost out on the nominee to Ronald Reagan and, when Bush successfully tried again in 1988, he ran a distant third—behind fiery televangelist Pat Robertson who in his platform proposed banning pornography.

In the end, it was that irrelevance that doomed the straw poll. May it rest in peace. 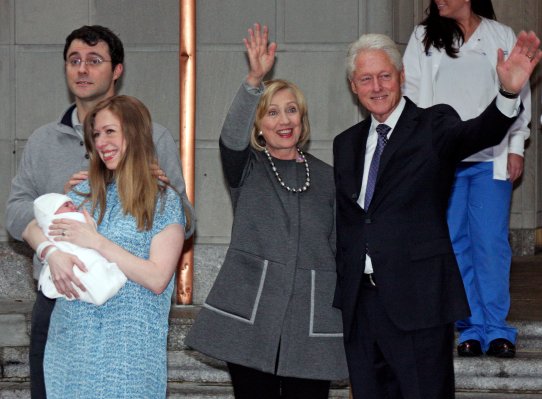 Bill Clinton Opens Up on Marriage, Hillary's Bid for President
Next Up: Editor's Pick