What do Al Gore, Whoopi Goldberg, Game of Thrones author George R. R. Martin, Carlos Santana, Nancy Pelosi, Mario Batali, and yes, Ann Coulter have in common? Give up? They are all members of the inimitable community of Grateful Dead fans commonly and affectionately known as Deadheads.

Urban Dictionary defines Deadhead as “a person who greatly enjoys the music of the Grateful Dead and particularly the genius of Jerry Garcia.” But decades ago, a subset of fans cranked up that devotion to a whole new level and began following the band from city to city. This subset grew in number, soon giving birth to a community with its own set of rules and even slang.

Sure, Beatlemania once swept the U.S., where the demand to see the foursome live gave rise to stadium rock. And the Rolling Stones still have audiences under their thumb, despite their combined age of 284. Fans of the band Phish—Phishheads—as well as Bruce Springsteen are a formidable force, but in terms of unbridled loyalty and devotion to the late Jerry Garcia and his bandmates, Deadheads are without peer.

Rock critic Robert Christgau was the first to write about this unique, traveling audience, commenting in the Village Voice after attending a 1971 New York City concert that “regulars greeted other regulars, remembered from previous boogies, and compared this event with a downer in Boston or a fabulous night in Arizona.”

And the band took notice. As Jerry Garcia once said, “our strong suit is what we do, and our audience.” The Dead played a different song set at every show, sending “regulars” on the road to the band’s next gig—since no two shows were ever the same. The Dead also not only allowed but actually encouraged fans to tape the concerts, eventually setting up a “taper’s section” for them. Hence, somewhere in the Deadosphere there exist tapes of practically all of the 2,500 shows the Dead performed in their 30 years of touring. If you have a lot of time to kill, just ask a group of Deadheads to talk about their favorite live show.

The atmosphere at a performance reflected a sense of community and a deep bond between the band and the audience. In an interview in the short film A Conversation with Ken Kesey, which followed the documentary Tie-Dyed: Rock ‘n Roll’s Most Deadicated Fans, author Ken Kesey commented on this phenomena: “[the Dead] weren’t just playing what was on the music sheets, they were playing what was in the air. When the Dead are at their best, the vibrations that are stirred by the audience is the music that they play.”

And if you couldn’t get a ticket to the show? No problem—there was plenty of action outside. When the Dead were in town, parking lots outside of their concerts were transformed into small villages, with vendors selling tie-died shirts, burritos and of course, drugs. Many of these vendors never attended a single concert, but would camp out, hoping to earn enough money to pack up their painted Volkswagen bus and follow the band to their next stop.

Among the parking lot hordes you could always spot the hopeful, roaming the grounds with a single raised finger: Deadhead code for “I Need a Miracle,” a free concert ticket. Interestingly: That gesture was still in play in 2007 when newly-elected House Speaker Nancy Pelosi threw a party and invited former members of the band to play. Outside stood a pony-tailed, grey-suited gent holding a sign that read, “I Need a Miracle.” A staffer on the inside recognized his clarion call and sneaked him in.

The parking lot scene was featured in the Tie-Dyed documentary and aptly described by one hippie couple in the doc, who met at a show and had been following the band for three years, with their baby —conceived at the first show—in tow: “It’s one big happy Dead kinda thing.”

It was not always happy, though. As Jerry famously sang, “every silver lining’s got a touch of grey”—more than a touch, actually. With the proliferation of drugs at Dead concerts, it was not uncommon to spot fans who had overdosed. The Dead were the first rock band with a group of fans who formed a 12-step program to keep the lure of drugs at bay during concerts, where temptation is everywhere. These Wharf Rats—named after a Dead song—gathered under an arc of yellow balloons during concert breaks, finding strength in numbers as they maintained sobriety “one show at a time.”

Over the years, the fan base changed and evolved, but one thing remained constant. As Dennis McNally, longtime Dead publicist and author of the best-selling book A Long Strange Trip wrote about deadheads, “[They] had only one thing absolutely in common: Each had experienced some inner click of affinity, some overwhelming sense of ‘here I belong,” when confronted by the Dead, its music and scene. It was the recognition of an essentially spiritual experience that bound them together. “

LIFE’s special edition The Grateful Dead: 50 Years Along the Golden Road is available now. Pick up your copy in stores today. Digital edition available at TimeSpecials.com 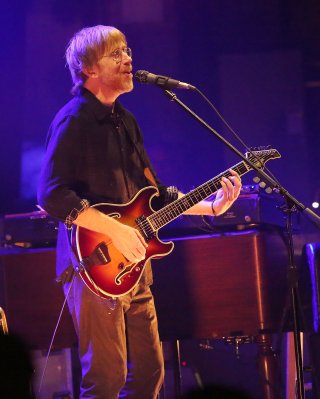 Grateful Dead Will Play Reunion Shows With Phish Guitarist
Next Up: Editor's Pick