That debate, over whether powerful French men inevitably escape punishment for their sexual transgressions, is far from over. But for now, Strauss-Kahn’s four-year legal ordeals are indeed behind him. He may have been acquitted but no one thinks he is innocent.

On Friday the prosecutor in the Lille trial concluded that the actions of DSK, as Strauss-Kahn is known, fell on the side of sexual liberty. Strauss-Kahn was charged with aiding and abetting prostitution with seven women, by attending numerous orgies with prostitutes in Lille hotels — a practice he continued in Washington during his tenure as Director General of the IMF, which is based in the U.S. capital. The charges that Strauss-Kahn faced in Lille carried a punishment of 10 years in jail and a €1.5 million ($1.7 million) fine. But in the end, prosecutor Federic Fevre said the group did not appear to have acted criminally, and that they were simply trying to “satisfy egos, ambitions and quite simply physical desires.” In an interview with BBC Newsnight that aired on Thursday, Fevre said, “Everyone is allowed to lead the sexual life they wish so long as that remains within the boundaries of the law.”

The right to a private life, and to indulge his outsized sexual habits, has been DSK’s defense since back in May, 2011, when New York police hauled him off an Air France plane and into Rikers Island prison, and charged him with the sexual assault and attempted rape of Nafissatou Diallo, a maid at the Sofitel Hotel in Manhattan.

Strauss-Kahn has now been cleared of all charges, settling grievances out of court for undisclosed sums of money with both the New York hotel maid and the young French journalist. For the once-powerful politician, his defense was based on the claim that all the liaisons were between consenting adults.

During the past month, DSK has cast himself as a man whose sexual appetites and unusual practices are simply outside the normal spectrum but which appeal to some women. He insisted he did not know that his sexual partners in the champagne-soaked orgies were paid, assuming that they were simply there for “excitement and adventure” like himself. And while he admitted he could “be a bit brutal with women,” he told the court, “I must have a sexuality which compared to average men is more rough. Women have the right not to like that whether they are prostitutes or not.”

Yet the trial’s lurid details have jolted even the French, who are accustomed to their leaders’ sexual adventures. Extramarital affairs have been a feature of virtually every French president; the late president François Mitterrand even had a daughter out of wedlock during the 1980s. And very few French media reported on Strauss-Kahn’s sexual affairs until his New York arrest, despite the fact that Paris was abuzz with rumors of DSK’s swinger lifestyle while he was Finance Minister in the 1990s. Even then-President Nicolas Sarkozy warned DSK about staying out of legal trouble in Washington while he was running the IMF in the midst of the global financial crisis.

Even so, French women have wondered whether Strauss-Kahn might ever have faced trial in France, had it not been for the New York arrest that set off a series of charges against him back home. “Most people said it would have been stifled, he would not have been arrested, because people love the allowances we make for rich and powerful people,” French feminist writer Christine Delphy told BBC Newsnight on Thursday. “In fact there is impunity from the police, from the justice, from the media. Powerful men will not be convicted.”

On a daily level, in fact, sexual harassment continues among politicians, according to French political journalists. Last month 40 prominent French women journalists published an enraged letter in the paper Libération, saying that there was a widespread culture of harassment of them among the men they regularly interview. “We thought the DSK affair had put the macho habits on the path of extinction,” they wrote, saying that instead, politicians sent suggestive text messages, proposed dinner, and made condescending comments during press conferences, like describing an interjection as a “real girl’s question.” Much is couched as “schoolboy humor” or “the French art of seduction,” apparently believing that that excused their behavior, said the letter

Strauss-Kahn is now left to watch this debate from the outside. Exiled from politics, and a seen as toxic presence by the Socialist Party of which he is a member, he has started a business consultancy, with the Serbian government and others as clients. “We can talk about lost honor,” Levaï told BFM. “And to reclaim his honor and dignity, that could take years.” These are years he once hoped to spend inside the Elysée Palace, the residence of the French President. 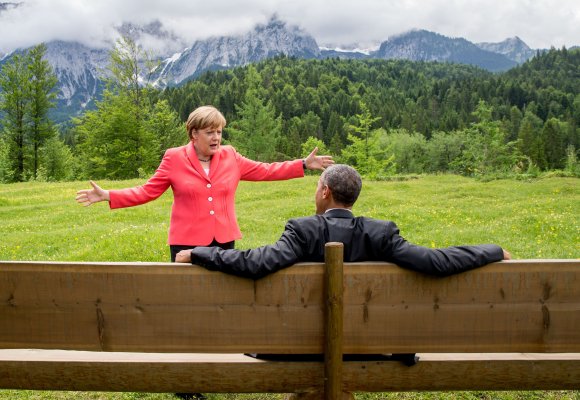 Here Are 5 Reasons the G7 Summit Was a Disappointment
Next Up: Editor's Pick