Scott Walker's Bucks Arena Deal May Be a 2016 Misfire

Wisconsin Gov. Scott Walker’s attempt to save a hometown hoops team could be an air ball that affects his presidential hopes.

Walker has proposed forking over $250 million in taxpayer money to help construct a new arena for the NBA’s Milwaukee Bucks, who have threatened to relocate if the city doesn’t build them a new home by 2017. But the idea of using public funds has drawn fire from Republicans in the Wisconsin legislature, as well as from some of the influential conservative groups who propelled Walker’s political career.

On the surface, a fight over arena financing in a basketball backwater is a provincial spat, not a national concern. But it has the potential to alienate Walker’s allies and undermine his conservative bona fides as it comes to a head over the coming weeks, amid the two-term governor’s final preparations for a presidential campaign launch.

“Government shouldn’t be in the business of financing private sports stadiums,” said David Fladboe, who has served as director of Americans for Prosperity’s Wisconsin chapter, which played an integral role in the trio of statewide victories that established Walker as a national conservative star. “This proposal needs to be rejected and the people of Wisconsin need to be protected.”

The MacIver Institute, a free-market think tank that has helped drive Walker’s agenda, also criticized the deal. “We really do question whether a fundamental mission of government [should be] to subsidize billionaires to build a brand new arena,” says Nick Novak, the group’s communications director.

For Walker, the billionaires in question don’t help matters. One of the Bucks’ co-owners is investment tycoon Marc Lasry, a close ally of the Clinton family and a top fundraiser for Hillary Clinton’s presidential campaign. Lasry, who purchased a stake in the Bucks in 2014, previously employed Chelsea Clinton at his firm Avenue Capital, and invested $1 million in her husband’s nascent hedge fund. Lasry’s co-owner, private-equity magnate Wesley Edens, has been a donor to Democratic Senate candidates.

Walker has argued that despite the cost of the deal, it would be cheaper to pony up to keep the Bucks than to let the franchise skip town. “We would lose $419 million over the next 20 years if we did nothing, if we said, go on, move somewhere else, which the NBA said they would do,” Walker told ABC News June 7. That figure includes the loss of tax revenue from NBA players, among a variety of other factors.

Walker’s aides say the state will only kick in $80 million—$4 million for each of the next 20 years, drawn from its general fund—and argue tax revenues will cover the cost. “This plan protects taxpayers from the loss of current and future tax revenue generated by the Bucks and visiting teams and supports a new arena without tax increases or state bonding,” says Laurel Patrick, a spokeswoman for the governor.

Local and county government will fund the rest, with the Wisconsin Center District kicking in $93 million in bonds. Those would be repaid with an extension of taxes that were set to expire in coming years, including 3% on car rentals, 2.5% on hotel rooms and 0.5% on food and beverage sales. Walker said the extension does not qualify as a tax increase, though many conservatives disagree. A complicated arrangement, in which Wisconsin takes on the role of collecting unpaid debt to the counties and takes a fee from collections, will kick in another $80 million over the next two decades.

“All across the nation,” Walker told ABC News, “when they do projects like this, it’s a good deal.”

Economists disagree. A host of academic reports over the years have found that using public financing for professional sports venues is a bad investment that rarely lives up to the lofty numbers brandished by the projects’ boosters and often incurs sizable cost overruns.

One such paper, published in 2001 by the Federal Reserve Bank of St. Louis, determined “the rate of return a city or metropolitan area receives for its investment is generally below that of alternative projects.” In addition, the authors wrote, “cities and metro areas that have invested heavily in sports stadiums and arenas have, on average, experienced slower income growth than those that have not.”

Citing such concerns, the libertarian Cato Institute opposed Walker’s proposal as “corporate welfare,” noting that “economic projections for subsidized stadiums are always vastly overstated.” So did the popular conservative blog RedState. Walker “is largely seen as a strong fiscal conservative,” the author wrote. “His recent announcement should surely put that idea to rest.”

Walker is not the only 2016 Republican presidential contender who has been caught between local sports fans and free-market economics. During Rick Perry’s governorship, two Texas NFL teams—the Dallas Cowboys and Houston Texans—built new stadiums financed in part by taxpayers. As governor of Florida, Jeb Bush at first rejected plans to publicly finance a new retractable-roof ballpark for the Florida (now Miami) Marlins. But as the club escalated threats to relocate, Bush expressed openness to multiple proposals under consideration in the legislature, which would have granted as much as $60 million in state subsidies to the construction of a new ballpark. (A bill never made it to Bush’s desk, but a similar subsidy was approved by his successor, Charlie Crist.)

Like Bush, President Barack Obama has shifted positions on stadium financing. As an Illinois state senator, Obama voted to publicly finance an upgrade of Soldier Field, the home of the NFL’s Chicago Bears. In a 2007 presidential primary debate, Obama defended the decision. “Absolutely, it was the right call,” he said, “because it put a whole bunch of Illinois folks to work, strong labor jobs were created in this stadium, and at the same time, we created an enormous opportunity for economic growth throughout the city of Chicago.”

But Obama has come to question the wisdom of public subsidies for private stadiums. His 2016 budget calls for barring the use of tax-exempt bonds to finance professional sports facilities. These bonds have raised about $17 billion during the past three decades to fund stadiums and arenas around the U.S

“Allowing tax-exempt governmental bond financing of stadiums transfers the benefits of tax-exempt financing to private professional sports teams because these private parties benefit from significant use of the facilities,” the Treasury Department wrote in its explanation of Obama’s budget request. “The current structuring of the governmental bonds to finance sports facilities has shifted more of the costs and risks from the private owners to local residents and taxpayers in general.”

The future of the Bucks arena proposal is uncertain. The issue has split both Wisconsin Republicans and influential talk-radio hosts. A cadre of Republicans have objected to tucking the proposal into the state budget, but as a standalone bill it could struggle to find the votes to pass. Republican are wary of a possible primary challenge if they support the bill, while Democrats are disinclined to back anything Walker favors.

Mordecai Lee, a professor of urban planning at the University of Wisconsin-Milwaukee and former Democratic member of the Wisconsin legislature, says Walker has handled a difficult issue deftly. At the same time, Lee says, it could backfire on Walker in the coming campaign as rivals try to pick apart his reputation as a conservative purist.

“It’s an opening for people to get to his right,” Lee says, noting 2016 rivals could criticize Walker as “a fake conservative who was going to do corporate welfare for billionaire owners of NBA franchises.” 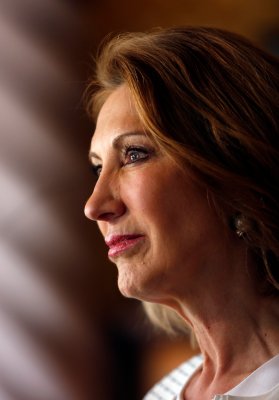 Carly Fiorina Wants to Redefine Feminism
Next Up: Editor's Pick