In an effort to stave off economic troubles caused by panic over the MERS (Middle East Respiratory Syndrome) outbreak, South Korea’s central bank lowered its seven-day repurchase rate to an unprecedented 1.5% Thursday, the fourth such reduction in 10 months, Bloomberg reports.

Authorities meanwhile announced that more people had died of the respiratory ailment, bringing the death toll to 10. The total infections now stand at 122, according to the Wall Street Journal.

As many as 3,000 people have been quarantined to date, and economists fear that a bleak mood will deaden any upward momentum the country’s already embattled economy might have been gaining.

This is the second straight year that the country has faced sudden threats to consumer sentiment, after last year’s sinking of the Sewol ferry also traumatized both the country’s people and its markets. Similarly, experts fear that worries over MERS could freeze domestic consumption, adding further troubles on top of the country’s plummeting exports, which fell 10% last year.

Public approval for President Park Geun-hye meanwhile dropped six percentage points in the past week, according to a Gallup Korea poll, suggesting that South Koreans were unhappy with Park’s handling of the crisis. She postponed a trip to the U.S. planned for next week and asked her Cabinet to execute “all preemptive measures” that might minimize the effect of MERS on the economy.

To date, all South Korean MERS casualties have been older than 55; all also had underlying medical conditions such as asthma, heart disease, and cancer. Still, this is the most extensive outbreak of MERS since the syndrome was discovered in Saudi Arabia in 2012. 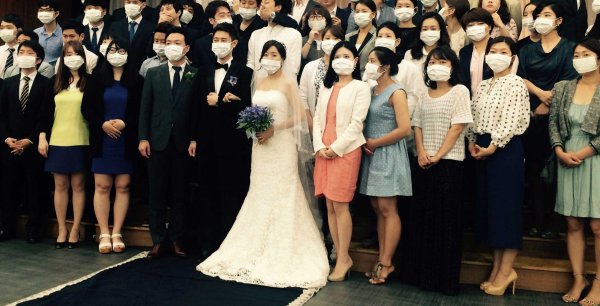 This Photo Symbolizes Just How Much MERS Is Taking Over South Korea
Next Up: Editor's Pick