Exclusive: Inside Miley Cyrus' Photo Shoot With People Across the Gender Spectrum

In a high-ceilinged photo studio in Hollywood, Calif., Miley Cyrus is running around in an androgynous yellow jumpsuit and bright white sneakers. But today, no one is taking photos of her—unless you count all the selfies that her new friends are asking for her to take with them, which she does with a smile, and sometimes with her tongue out. Today the 22-year-old pop star is the photographer, shooting portraits of people who identify as transgender, trans*, genderqueer and gender non-conforming.

They’re the stars of a new social justice campaign called Happy Hippie Presents #InstaPride, a collaboration between Cyrus and Instagram that launches June 15. In an effort to boost awareness and acceptance of people across the gender spectrum, Cyrus is using her platform to focus public attention on about a dozen subjects whose portraits will live on Instagram branded with the #InstaPride hashtag.

It’s an affirming day for people like Precious Davis, a biracial transgender woman who is sitting on a couch beneath giant silver balloons that spell out the word “LOVE” in capital letters. She’s next to her fiancé, a transgender man named Myles Brady who prefers to let Davis do the talking. As Cyrus instructs a shirtless transgender teenager to let off another confetti canon, Davis recalls her youth in Omaha, Neb., where she says she grew up listening to her family say, “‘No, no, no. You can’t be this.’” Soon she will be in a floor-length sequined gown, with Cyrus and everyone else fawning over how beautiful she looks.

“Anyone should be able to express how they feel, without question, and be able to live,” Cyrus says. “And use the f—ing public restrooms.”

Happy Hippie is a non-profit focused on helping homeless and LGBT youth that Cyrus launched earlier this year, partly in response to the death of Leelah Alcorn. Alcorn was a transgender girl from Ohio who killed herself by walking into traffic after, according to her suicide note, her parents put her through conversion therapy. (“I loved my son,” Alcorn’s mother told CNN in January. “People need to know that I loved him.”)

“People like Leelah are not living their lives because people are telling them what to be. And there are women miles away from me right now that are only allowed to show this much of their eyes. I can stand on a stage with my tits out,” Cyrus says. “It’s so unfair that I’m allowed to be like this and there are two men that can’t get married in f—ing Nashville right now.”

The portraits and the people in them are meant to serve as positive examples for young people who might be struggling to figure themselves out, as well as reference points for those who might not personally know anyone who doesn’t feel at home in their own body. Just 9% of Americans say they have a close friend or family member who is transgender—a population that experiences poverty, homelessness and harassment at dramatically higher rates than the general public.

The #InstaPride campaign comes at a time when the T-word is increasingly ubiquitous, courtesy of icons like Laverne Cox, projects like Amazon’s Transparent and political fights in state legislatures around the country over “bathroom bills.” In the bathroom at the studio where Cyrus is shooting, a television is playing CNN, where two anchors are discussing recent revelations about Bruce Jenner, who has not yet come out as Caitlyn Jenner on the cover of Vanity Fair.

The people Cyrus is putting in front of the lens aren’t likely to find themselves on the cover of a magazine. Many of them are in a giddy “Is this really happening?” daze. “For someone that famous to say, ‘Hey, I’m looking at you. I know who you are, and I celebrate you,’ that means the world,” says Mariana Marroquin, who fled Guatemala as a teenager because her family feared for her safety. Now, at the Los Angeles LGBT Center, she helps other immigrants who “cannot be themselves” in their home countries.

Her colleague Alex Schmider is here too. “As soon as I heard about this project, it resonated with me,” Schmider says as he watches Cyrus scoop up ticker tape with her spindly arms and drop it at one of her subject’s feet. The young transgender man thought he was a lesbian until finally hearing the term “gender identity disorder” while in a psychology class at age 22. “I’ve always thought, if I had images that I could have seen, if I had people to look up to—what a powerful thing that would have been,” he says.

Nearby is A.J. Lehman, a Boston-area high school student who proudly walks around without his shirt on, showing off a masculine chest that his family took out a loan to finance. Tyler Ford, who grew up with pop star Ariana Grande in Boca Raton, Fla., prefers the pronouns they, them and their and identifies as agender—meaning they feel they have no gender at all. They follow Cyrus’ instructions to stick their ass out as Cyrus takes their picture, wearing a leotard and five-o’clock stubble. Meanwhile, Brendan Jordan is walking around in high-heeled boots and a translucent raincoat he brought from home. The teenager has ridden here on a wave of celebrity that emerged after he stole a local Las Vegas newscast by vamping—for quite some time—during a live interview. If pressed, Jordan will say he goes by he. But when people ask whether he is a “he or a she,” he usually answers, “I’m Brendan.”

The walls of the studio are decorated with yellow streamers. There are yellow balloons and racks full of yellow hoodies and boas and dresses that the day’s stars are sorting through before their shoots. The color, Cyrus says, is happy and not sexualized: There is no pink or blue. Assistants dump glitter on the subjects, who blow bubbles and review their portraits on a screen with Cyrus after she produces each batch.

Many of them have brought members of their families along. Leo Sheng, a creative writing student at the University of Michigan, is in Hollywood with his two moms. Wearing yellow shirts, they say that accepting Leo’s coming out wasn’t any easier because they’re part of the LGBT acronym. “It’s very scary thinking about your child possibly being rejected. There are social stigmas,” says his mother, Nancy Barton. “If we could do it over, I think we would have embraced it more fully at the beginning and been more confident in trusting him and supporting him.”

Jordan, too, is there with his sister Hailey and his mom, Tracy. “The whole family has totally embraced Brendan because he’s so happy now,” Tracy says, taking photos and video for her son’s burgeoning YouTube following. “You could tell, the couple years before he came out, he would get angry. He was just really angry. And I never knew why.”

The campaign was born in a meeting between Instagram and Cyrus, who had offered to give them feedback on their product; they discussed potential features like allowing users to designate “word sensitivities,” which would allow them to ban certain words from appearing on their feeds.

Cyrus is a passionate ally, although with all the attention focused on transgender Americans right now, some in the community have wondered whether the celebrities taking up their cause are doing as much harm as good. Even the people being photographed had some skepticism about Cyrus’ attentions.

“You have all those fears that you would normally when somebody from outside the community tries to rush in and save us,” Martela says of as she sorts through the racks of yellow clothes. “So often that’s a disaster. But then seeing what she’s doing—she’s bringing in people from the community and really seems to have done her homework.” With Martela is her new wife, Nina Chaubal. The couple runs Trans Lifeline, the first crisis hotline for transgender people staffed solely by transgender people, 41% of whom have attempted to take their own lives. Of the reasons people call them, Martela says, family rejection “is the number one thing.”

Gigi Gorgeous is nearby getting her face powdered, with her publicist and manager hovering. She’s a YouTube sensation who has been uploading videos for the past six years—from a time when she was presenting as a boy to the present, where she has become a buxom icon with a Crest endorsement deal. She often wears Barbie-branded clothing and looks a bit like a giant doll, sitting in a chair with blue eyes and blonde hair getting her makeup done. But she’s also a 23-year-old whose mother died before Gorgeous ever got to be honest about her gender identity. “I still to this day regret not telling her I was trans,” she says. “She never knew. Maybe she knew. But we never talked about it or anything. That was kind of a deciding factor for me. Life is too short.”

The only hint of the celebrity who launched a thousand think pieces when she twerked on stage at the 2013 VMAs comes at the very end of the day, when Cyrus pumps up the music and everyone gathers for a dance session. Cyrus twirls a boa, does the robot and gyrates. Still, it seems more like an attempt to get everyone to loosen up than someone asking to be looked at.

“In places like Indianapolis, you can tell someone that if they’re trans or gay they can’t use your public bathroom,” Cyrus says, referencing the “religious freedom” law passed earlier this year that has since been rolled back. “No matter what I’d do, I’d probably be allowed to go in there. Because they’re starf—ers. And these people are real people. I don’t want to be anywhere they can’t be.”

Read next: Miley Cyrus: ‘You Can Just Be Whatever You Want to Be’ 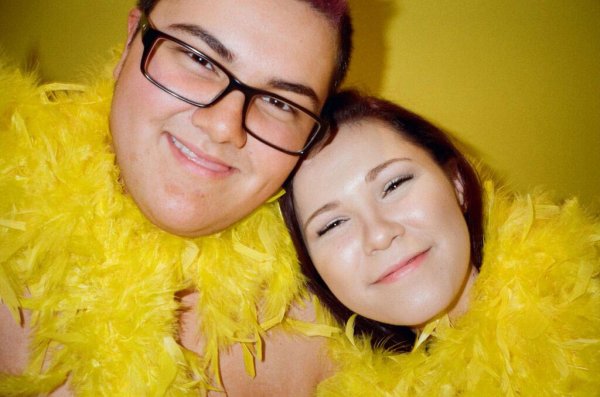 Meet the Stars of Miley Cyrus' #InstaPride Portraits
Next Up: Editor's Pick