By Matt Peckham and Matt Vella

This is a lightly edited dialogue between TIME’s games critic Matt Peckham and assistant managing editor Matt Vella about playing The Witcher 3: Wild Hunt. The conversation took place over email over the period of several days.

MV: Good lord this game is large. This is the kind of thing that’s often said about a new game, especially of the open-world variety. Developers love to tell journalists “how much bigger the map is this time around,” as if map inflation correlated to fun. (In my experience, it doesn’t.) But the sense of scale in The Witcher is pretty consistently confounding. I don’t know if you’ve had a similar experience but, several dozen hours in or so, I find myself having these mildly disconcerting dissociative feelings when I realize just how much ground I have left to cover. The game is being compared to Skyrim, Grand Theft Auto and Red Dead Redemption. But this feels (pardon me) next level because those worlds are large, but largely empty. The Witcher 3‘s world, by contrast, crammed with stuff to do, stuff to see, stuff to get lost in.

The game’s mechanic for letting players know about what’s available around them is pretty simple: reading the message boards in the various towns and hamlets puts points of interests on the map nearby. These are question marks that only reveal themselves—as hidden treasures or bandit camps, for example—once you jog over to check them out. What’s boggling about this is that quests aren’t only displayed with little yellow exclamation points hovering over NPC’s heads. They’re littered throughout the world, many in hidden documents found serendipitously at said points of interests.

MORE: This Is the Insane Number of Copies The Witcher 3 Sold

This all has a rippling effect which, once you start to understand how big the world is, is fairly mesmerizing. The only analogue I can think of is the first run through World of Warcraft way back in 2004. Then, the idea of being able to run from one end of the world to the other in basically a straight line was revelatory. I feel much the same way in the world of The Witcher.

Is your mind as boggled?

MP: “The future of video games is a gaming singularity so unfathomably ginormous and ingenious you can’t play anything else.” We’re either blessed, or doomed.

But yeah, I couldn’t agree more about the scale being off the charts. You stop and gaze at the game’s bosky expanse and think back to all the comparably teensy games that use to seem big. The developers boasted about how much grander The Witcher 3 was going to be than anything else. That’s usually a bad idea, but boy did they deliver here, or at least that’s my impression at the 1,345 hour mark.

Okay, maybe not that many, but it kind of feels like that many, and at the same time, as you say, it’s filled out. You know, “What are those Creatures from the Black Lagoon guarding over there in the lee of a cliff?” Or: “Is that a giant black rock by a glowing stone pylon?” (Oh hey there killer bear!) Or, all the contracts that kick off like fetch or kill quests, then morph into these elaborate Sherlockian conundrums with a dozen twists and outcomes that resonate forward, nudging all these under-the-hood variables that then alter how you interface with some unforeseen thing or person down the road.

Speaking of running from one side of the world to the other, you can’t do that in The Witcher 3, because it’s actually two giant detached maps you’re eventually warping between. I think someone, somewhere, griped that that disqualifies the game as an “open world.” When you take the time to jog from Bald Mountain (southeast Velen) to Novigrad (the metropolis on the northwest side), you realize how silly that stance is.

So the open world thing is new to the series, but the “mature narrative” thing’s been a staple from the start. How do you feel they’ve handled that so far here?

MV: I have to confess I have the completist gene and, more often than not, I find myself racing through dialogue, nuance, context, et cetera to get to the end of many games. Even the ones I really like. I rarely find myself enjoying the writing of most games, aside from the very occasional exception like Telltale’s fine The Walking Dead series.

The Witcher is another exception. Early on, jokes like the one about teacher tenure signal a different tone, one that rises above the typical pablum of high-fantasy that, to my ears, bleeds together meaninglessly. (High elves? Dark elves? Whatever.) But the texture of the quests is also great. I’m thinking in particular of the Red Baron quest chain which ended, in my play through, with a pretty poignant and grim denouement.

MORE: How The Witcher 3 Just Got Significantly Better

I’m nowhere near the end, of course, but I wonder if the game can possibly keep up the momentum and depth of its writing.

The sex stuff is weird.

MP: The way the game handles its sexually-themed scenarios seems more refined, too. I haven’t played enough to make profound generalizations about it passing the “male gaze” test (in fact I’d wager it won’t, because so little does). But contrast with that scene in the original 2007 computer game where you have to talk to a dryad in a swamp. The dryad’s wearing nothing, which in itself doesn’t feel out of step with the character or context. But then you notice, for lack of a better way to put this, that the character’s breasts are bouncing around as if possessed. It was absurd (plus: anatomically freakish).

MV: I find the sex in the game to be the most idiotic and juvenile thing I’ve seen in a long time. Some initial reviews knocked the game for its treatment of women. The more I play, the more I think these reviewers were onto the game’s most profound weakness. Female characters are often poorly rendered in video games (thematically, not just graphically), but I find the scantily clad characters, the not-so-clever sexual innuendo, and yeah the breast issue a needless distraction. As you say, there is an early quest line in which you accompany a sorceress through a series of trials. Her low-cut shirt is a constant companion too. It’s just not that it’s bad, it’s that it is wholly unnecessary. And kind of gross.

This aside, the world building is pretty incredible isn’t it?

World-building unlike any other.

MP: Then again, thinking about the nudity bits, you have movements like this, and so I worry criticisms like “Oh no, an areola!” raise less obvious cultural questions. But I’m also probably being more forgiving, because so many other games treat sex like we’re a bunch of towel-snapping knuckle-draggers. I’d still submit The Witcher 3 has moments where it’s at least on par with what HBO’s up to in a series like Game of Thrones.

But to your point about the world building, it’s definitely better focused. Richard Garriott of Ultima fame is the guy credited with singlehandedly launching this idea of game worlds where everything you can see has heft or can be picked up or wielded in unplanned (and potentially game-breaking) ways. That was heady conceptual grist back in the 1990s, but now that we’ve seen Bethesda riff-slash-flog the concept endlessly, it’s almost at the level of fetish: there to check a questionable immersion box, not an essential gameplay one.

I’d rather futz around in a world like The Witcher 3‘s any day, with half as many incidental gewgaws, but twice as many visceral moments. I’m frankly more impressed when someone gets a sunset or sunrise right, than whether I can chop some tree up into cordwood and plug that into an easily exploited economic equation. Confession: I’ve spent way more time dawdling and gobsmacked in The Witcher 3 than, you know, getting game stuff done. I’ve restarted three times, just to revisit certain areas and moments, if that tells you anything.

MV: Totally agree. Ok so we both love this game. We both (probably?) think it’s a strong contender (favorite?) for game of the year. What’s wrong with it?

I’d submit that it has some technical problems. I started on the Playstation 4 version before switching to PC about 10 hours in. This is my preferred platform because you can get a consistently higher frame rate which, while not only prettier, makes the game easier to play.

What else would you change if you could?

It has some problems.

MP: So this may sound weird, but I prefer games that run locked at 30 frames a second because they feel more cinematic. I blame 1926!

The game definitely has a few things working against it. The superficial “talk” button where you pass by people who literally grunt acknowledgement and nothing more (better to have no “talk” option in those cases). The way you “psychically” alert enemies to your presence by proximity, regardless of whether you’re in their line of sight (the whole collision detection scheme’s totally wonky — archers can fire arrows through giant trees!). And the way the game repeatedly interrupts the main quest by sending you down all alluring rabbit holes — or maybe that’s actually a strength, because open world games are only linear events that unfurl on objective timescales if our imaginations say they are.

MV: They seem to be trying to address some of the wonkiness, which is wise. The latest patch did away with the constant “hit-A-to-light-candle” prompts that were fairly persistent and annoying. But you’re right there are way too many prompts. Other nits: it’s amazing that Roach, your horse, ever found its way out of a stable considering how bad it is at navigating the world, let alone tight spaces in cities. I’ve gotten stuck in water areas that should give way naturally to a shore and found myself awkwardly “climbing” out eventually. I’ve also seen a lot of drowners hovering 100 feet above the air while I’ve been traversing water in a boat.

And yet, I can’t recall a game I’ve had more fun with. We’ve been going on and on here, but I guess there’s really only one question left to answer. Is this the best RPG of all time? You have to answer first!

MP: Oh sure, put my street cred on the line! It’s tough, because we’re still honeymooning. It certainly feels momentous. But up against pioneers like Ultima Underworld, Ultima VII: The Black Gate and Planescape: Torment? Or more recents ones like Fallout 3, Guild Wars 2 and Xenoblade Chronicles? (Note the wooly mammoth in the room isn’t on this particular list for me.) I’m going to cheat *ducks* and say “check back in a half-decade or two.”

MV: Ok, ok, ok. Unfair question. I’ll dodge the question too. It’s definitely in contention for game of the year at this point. And RPG of the decade. But those a conversations we can have later in the year. Now where’s my horse? 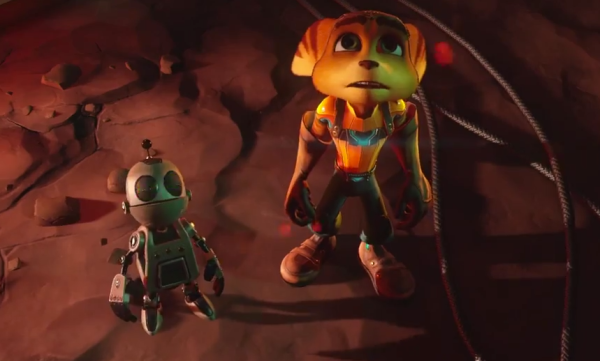 This Ratchet & Clank Trailer May Finally Have Pixar Beat
Next Up: Editor's Pick