The U.S. is dispatching around 450 additional military instructors to help Iraq’s government recapture Ramadi and Mosul, adding to the approximately 3,500 U.S. military personnel already on the ground. The move seized headlines, but it’s far from a game changer in the war against ISIS.

Obama’s decision should come as no surprise. The past few weeks have seen increasingly dire headlines about the radical terrorist group’s advances in the region. With the fall of Palmyra, ISIS now controls over 50% of Syria’s landmass, on top of its gains in Iraq, which includes the recent invasion of Ramadi. Obama is taking a calculated risk in sending trainers, but a small one. More military instructors will not be enough to defeat ISIS, and Obama knows it. But it just might be enough to change the narrative.

Defeating ISIS would require thousands of ground troops to actually lead the fighting — and that’s just the kind of commitment Obama is keen to avoid. The President needs to show the American people that he is sticking with the Iraqi army, giving it a little more time and a little more resources.

Some Republican presidential candidates, especially Marco Rubio and Lindsey Graham, are pushing for a sustained engagement in the Middle East to root out ISIS. But following two costly and open-ended wars in the region, that option is not popular with the American people.

And it’s not only Americans who are hesitant to put their troops in harm’s way. The West as a whole is growing more risk-averse. A Pew study released today shows more than half of all Germans, Italians and French would oppose using military force in response to any Russian aggression against NATO allies — despite the fact that the NATO treaty requires member nations to treat an armed attack against NATO country as an attack against them all. Just getting the Europeans to accept an additional six months of sanctions on Russia has been a serious slog, even with Putin consistently escalating hostilities in Ukraine.

Aversion is the name of the game these days. Obama talks a big game about ISIS and how it must be destroyed, just like he talks big about how Russia must leave Ukraine. But he carefully avoids mentioning who exactly will defeat ISIS or drive Russia out of Ukraine. It looks like Obama is doing just enough to drag out these difficult challenges — and hand them over to the next President. 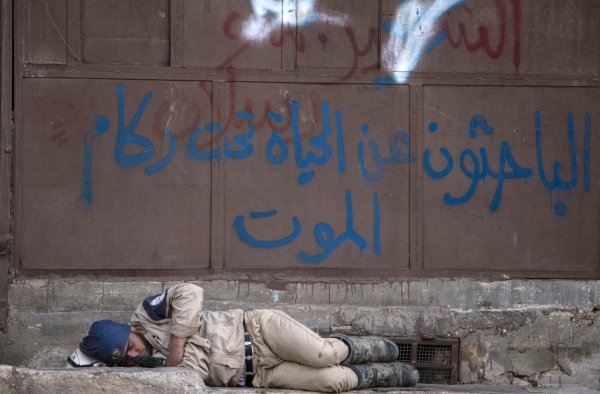 Art, Not Just Geopolitics, Is Key to Understanding ISIS
Next Up: Editor's Pick