The New Apple Ads Will Make You Feel a Million Feelings

Ads from big, consumer-oriented tech companies have followed a pattern over the past decade or so—presenting software, services, and gizmos as bringing people together, in perfect harmony. The ads for the new Apple Music service fall right in line.

One of the three new spots features a voiceover from Trent Reznor of Nine Inch Nails (and Beats, which Apple acquired for more than $3 billion) telling us that the service treats music “less like digital bits and more like the art that it is, with a sense of respect and discovery.” And Apple, he says, means to “actually accommodate and support the artists who make the music, and not just the top-tier artists, but the kids in their bedrooms, too.” The implication is that Apple will do this better than services like Spotify.

Whether this turns out to be the case, only time will tell.

In another spot, the focus is entirely on the history of recorded music. It depicts all different kinds of people, in all different kinds of places, enjoying music. It starts with the first phonograph in 1888, and courses through hi-fi systems, jukeboxes, cassette tapes, and computers, and ends with, of course, Apple Music, which is depicted here as the culmination of all this history, the technological endpoint, which of course it isn’t.

The third spot is the most true to the holistic, global vibe that has become obligatory in ads from big tech companies like Microsoft, Google, and Apple itself. And it’s the most branding—oriented. It shows people around the world doing things—running, dancing, crying, doing sit-ups—while listening to Pharrell’s “Freedom.” The way the music is muffled for the part showing a woman crying is a nice touch.

Don Draper was depicted in the series finale of Man Men as having created the iconic “Teach the World to Sing” Coca-Cola ad. Being a fictional character, he obviously didn’t, but the way his idea was presented—as being born of true sentiment and a genuine wish for global togetherness, wasn’t really far off reality. He was trying to sell sugar-water, sure. But that’s not all he was doing. And we can presume Apple believes in its own image, too, even as it’s trying to separate people from their money by presenting that image to them. It’s all in the game. 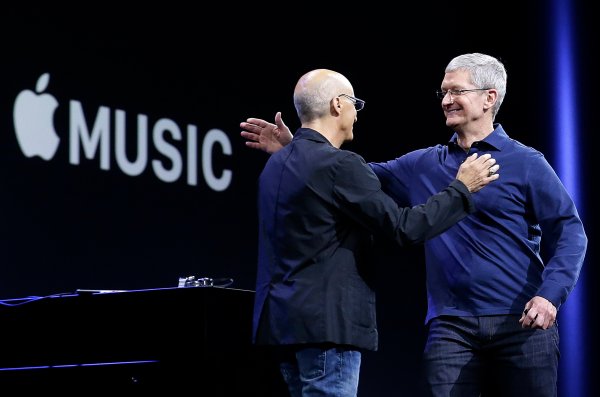 Apple Exec: Apple Music Puts Artists Back 'in Control'
Next Up: Editor's Pick