Meet the Father of Paternity Leave

This week, the man most celebrated for his impact on paternity leave policies is Richard Branson: the Virgin founder made news by announcing that some employees at Virgin Management would be eligible for a full year of paid new-dad time off.

Almost exactly 45 years ago, a very different man—a teacher, not an executive—was the one making strides for paternity leave. His name was Gary Ackerman, and he was a teacher in New York City who had a daughter in late 1969. When his daughter was about 10 months old, he applied for a leave (without pay) for childcare purposes. As a resulting lawsuit laid out, the principal did not recommend to the district that Ackerman’s application be approved; unsurprisingly, the superintendent followed suit by not approving the leave. Ackerman tried to appeal the decision several ways, and was told by many people that the childcare leave policies of the Board of Education only applied to female teachers.

As TIME later reported, “[t]urned down, he went AWOL from his job, [and] with his wife Rita filed a complaint of discrimination with the Federal Equal Employment Opportunity Commission and sued the board in U.S. district court. Their argument: granting child-care leaves only to women is an invasion of privacy because it forces mothers to be housekeepers and child rearers and prevents husbands and wives from dividing up family responsibilities as they see fit.”

In 1973, the EEOC, TIME continued, “found that the mothers-only rule ‘discriminates against male teachers as a class.’ As a result, the board says it will reword its bylaws to ensure equal rights for fathers.” That autumn, the relevant section of the Board of Ed bylaws was amended so that it no longer referred to an affected teacher as “her” or relied on the timing of the teacher’s pregnancy, thus expanding its relevancy to fathers and to adoptive parents. The determination is widely regarded as the groundbreaking first step toward paternity leave’s existence.

Just how groundbreaking was it? Ackerman’s motion to have a lawsuit he filed against the Board of Ed (separate from the EEOC case) considered as a class-action suit was denied because, though 40% of the Board of Ed’s teachers were men, he was the first male teacher ever—and one of two in total—to apply for childcare leave before that 1973 change. According to a New York Times article about the EEOC’s decision, at the time about 2,000 to 3,000 female teachers took a maternity leave in the city each year.

Ackerman was eventually denied compensation in his suit, because he had already stopped teaching and the relevant bylaw had already been changed, but that doesn’t mean his story came to an end. Though his first job after leaving teaching was at a local newspaper, he soon transitioned to a life in politics. Elected to the state senate in 1979, he went on to serve in Congress for three decades, until January of 2013.

Correction: The original version of this article misstated how long Gary Ackerman served in Congress. He served for three decades. 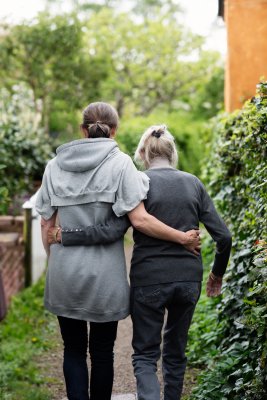 This 92-Year-Old Just Adopted a 76-Year-Old Daughter
Next Up: Editor's Pick