The Insane Reason You Could Pay 50% More For Car Insurance

Customers check out a vehicle on the sales lot at a CarMax Inc. dealership in Brandywine, Md., on March. 29, 2015.
Bloomberg/Getty Images
By Martha C. White

You probably figure that if you’re a bad driver and collect some fender-benders or speeding tickets in your DMV record, your insurance company is going to charge you accordingly. But what you might not have expected is that insurers also might slap you with penalties — sometimes hefty ones — if you’ve blown off paying a bill here or there.

Car insurance companies in all but three states — California, Hawaii and Massachusetts, where it’s illegal — use a driver’s credit history in the secret sauce of their underwriting formulas. People with bad credit are considered higher-risk customers, so insurers often charge them more, explains Jill Gonzalez, an expert at WalletHub, a personal finance site that just published a study showing what insurance companies in what states penalize drivers the most for poor credit.

WalletHub asked the five biggest car insurance companies in the country for quotes for two imaginary drivers who were identical except that one test case had excellent credit and the other had no credit history.

“There is a strong correlation between one’s credit characteristics and insurance losses,” Gonzalez says. “The insurance companies usually look at the the credit history to see how the insured can manage his or her risk exposure.”

Across the board, the difference between quotes given to the “great credit” versus the “no credit” driver varied by 49%, but some fluctuations were much, much greater.

Credit obviously isn’t the only factor insurers look at to determine premiums, and different companies assign varying degrees of importance to this characteristic. WalletHub’s study finds that Farmers Insurance seems to place the most weight on driver credit data, with a 62% difference between quotes given to WalletHub’s two hypothetical drivers. Even Geico, the insurer WalletHub says “seems to rely on credit data the least,” has a 32% fluctuation between the two driver scenarios.

Gonzalez says the biggest issue consumers face is that a lot of companies aren’t up-front about their use of credit data in underwriting. “The problem we discovered is that not all of the companies are transparent in letting their customers know that credit scores impact insurance premiums to a significant extent,” she says.

WalletHub looked at the websites of the 10 biggest auto insurers to see how soon, how often and how prominently they advised customers that their credit would be a variable in the eventual premium price they were quoted. It says Progressive is the most transparent, but Gonzalez points out that a lack of transparency among many carriers means that drivers have to do a lot more homework if they have credit problems.

“Consumers with no credit have to do some serious research before deciding on an insurance company,” she says. 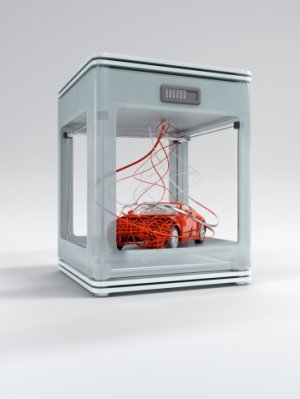 Was 3D Printing Just a Passing Fad?
Next Up: Editor's Pick