In less than 30 days, Royal Dutch Shell wants to begin drilling for oil in the newly ice-free parts of the Alaskan Arctic. The company is ignoring the advice of engineers and scientists around the world who say this type of extreme fossil fuel project can’t go forward if we have any hope of stopping the most catastrophic effects of climate change. From India to Australia, we’re already dealing with droughts, superstorms, and resource scarcity caused by climate change, and if we don’t change our energy system to help protect the Arctic, it will all only get worse. But instead of seeing this as a what it is—a tragedy—Shell is using the melting Arctic as an opportunity for profit.

In 1979, I was in a movie with Jack Lemmon and Michael Douglas called The China Syndrome. In that film, we dramatized how corporate greed can trump safety with potentially tragic results. The scenario seemed all too real for people when three weeks after the premiere, the Three Mile Island nuclear disaster struck Pennsylvania. We found we had unwittingly captured a tragic zeitgeist and helped further popularize the anti-nuclear movement in the United States through our story. It felt like maybe the tide was turning towards protection rather than exploitation.

But in the 36 years since The China Syndrome, we’ve seen energy companies ignore safety risks and cut corners for profit again and again, and, sadly, this year is no different. We’ve already seen one oil spill in Santa Barbara County, and President Barack Obama is about to let Shell—which, in 2012, lost control of both of its rigs, crushed its spill response equipment “like a beer can” and hired a contractor, Noble Drilling, that committed eight environmental and maritime felonies—try to drill for oil in one of the most delicate ecosystems on earth.

In The China Syndrome, the nuclear threat lent itself to a thrilling disaster narrative because the mistakes at a nuclear plant could provoke an immediate crisis with catastrophic local results. Arctic drilling is no less of a catastrophe, but it doesn’t cause the same alarm bells to go off at the point of impact. Climate change doesn’t happen all at once. That makes it hard to recognize, and even harder to stop. The Arctic is in danger, and each new drop of fossil fuel that gets extracted and burned puts it closer and closer to disappearing forever.

This will affect us all. Thankfully, people around the world have begun standing up and saying, “Shell NO” to this project and the movement is now over seven million strong.

Right now, in Seattle, for example, Shell is preparing its drill rig the Polar Pioneer for this summer’s drilling. But the people of Seattle, who have shown climate leadership for years, are standing up to Shell and its cronies. Members of a group called the Raging Grannies were arrested Tuesday during a protest at the Polar Pioneer’s terminal. On the waterway in front of the rig, a “Solar Pioneer” powered by clean energy has been hosting speakers, films, and music for activists on land. And last month, an enormous kayak flotilla with thousands of participants swarmed the rig to show Shell this isn’t the type of future Seattle wants. Every minute activists like the Raging Grannies delay the project is another minute President Obama has to reconsider giving the company the green light this summer.

Shell is desperately trying to escape the Seattle spotlight and leave for Alaska. President Obama has been on the defensive since the protests have started. He’s said Shell and its contractors have “learned their lesson” since Shell’s disastrous 2012 attempt to drill, but, unfortunately, the only proof we have that anything will be different this time is Shell’s PR. This year, the company has already failed one Coast Guard inspection, and it’s refusing to make public the court-mandated audits from 2012. The president still has a chance to heed the warnings and stop this disaster before it starts. He should use his authority to do it. Not only is the Arctic at stake, but his legacy as an environmental and progressive leader is at stake as well.

Our children and grandchildren don’t have to live in a world of oil spills and climate disasters. There is another road, one that leads us away from fossil fuel extraction and into the new world of clean energy. With this road comes hope, climate justice, and clean jobs. This road is no pipe dream. We can see clean energy already working in countries including Norway, Austria, and the Netherlands. In Germany, 25% of the country’s energy comes from renewables, and its energy transition has created about 400,000 jobs in a decade.

That’s the future we want and need. This is what’s at stake. This is why I’m going to Vancouver to stand alongside First Nation activists, parents and grandparents to keep up the momentum to prevent Arctic drilling. It’s not too late for the president to cancel Shell’s Arctic drilling program now.

Correction: The original version of this story misstated the location of Three Mile Island. It’s in Pennsylvania. 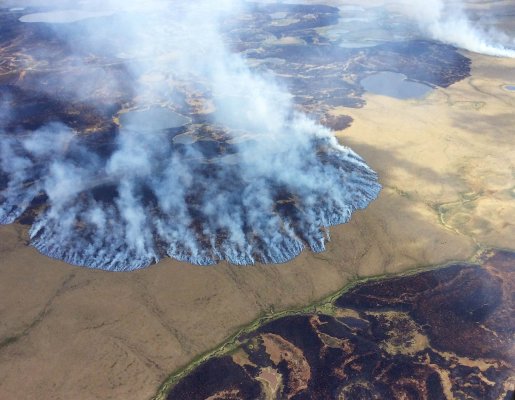 Two Tundra Wildfires Burn in Alaska
Next Up: Editor's Pick