Now that’s one for the wedding album.

Engaged couple Joseph Turnage and Brandon Moore were posing for engagement pictures recently in New York’s Central Park with photographer Alisha Siegel when notorious funnywoman (and prankster) Amy Schumer popped up while jogging and joined in on the photo-shoot fun.

Siegel was in the middle of snapping photos of the soon-to-be-married duo near the reservoir on 86th Street on the east side of the park when she heard someone yell, “Oh my god! Are you taking engagement photos? Let me get in one!” Siegel recalls of the run-in.

“I thought it was a little weird, but I said yes anyways,” Siegel tells PEOPLE. “She took off her sunglasses, we snapped a quick pic, and right after, she says, ‘You guys know I’m like reeeeeeal famous.’ I take another look it hit me that it was Amy Schumer!”

The Brooklyn-based photographer admits that the encounter was a complete shock, leaving her just a bit starstruck.

“My face went totally blank and I said, ‘Oh my god! Amy! I love you!’ Needless to say I was pretty excited,” says Siegel, 25.

And the couple, who are set to wed in Manhattan in October, were just as stunned.

“I think we were all in shock that it had actually happened. We were just doing our thing and taking pictures. Never in a million years would we think Amy Schumer would want to jump in a photo,” Siegel says, also noting that the Comedy Central star was “beyond friendly” and “hilarious.”

Adds Siegel, “Who else would photobomb an engagement shoot like that? Only Amy.” 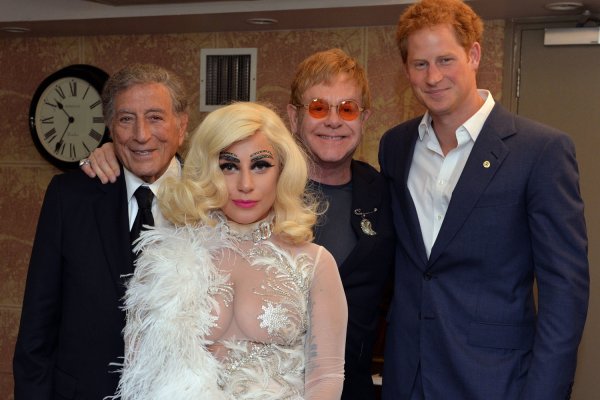 Of Course Lady Gaga Met Prince Harry in a See-Through Gown
Next Up: Editor's Pick