Apple’s CEO Tim Cook: Diversity Is ‘the Future of Our Company’

Apple’s CEO Tim Cook doesn’t mince words when asked about the importance of diversity: “I think the most diverse group will produce the best product, I firmly believe that.”

In an interview with Mashable ahead of Apple’s Worldwide Developer Conference (WWDC) Monday, Cook told the website that Apple is a “better company” by being more diverse. He says a lack of diversity in tech isn’t because women don’t want to be involved in the sector. Instead, Cook places the blame on the broader tech community saying generally, “We haven’t done enough to reach out to show young women that it’s cool to do it and how much fun it can be.”

Apple is certainly part of the problem. A workforce data report last year showed that just 30% of its global workforce is female. And leadership positions at Apple skew even more white and male than the broader workforce. Cook has in the past said he’s not satisfied with the numbers.

The gadgets maker is also putting a little money up to match Cook’s interest in promoting diversity. Apple generated headlines earlier this year when it donated more than $50 million to groups that want to get more women, minorities and veterans working in tech. But let’s not throw Apple a parade just yet. The company posted a profit of $13.6 billion in the second quarter alone.

More: Read about Apple in the latest Fortune 500 list 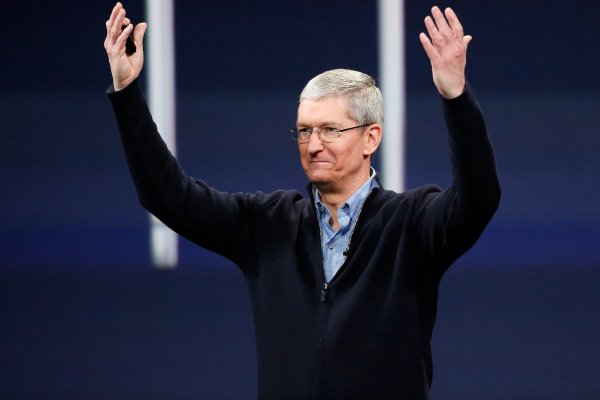 3 Staggering Figures About Apple That Tell You Everything
Next Up: Editor's Pick