A general view of the Carrier Dome seen through a camera on an iPhone of a fan in the stands at the start of the game between the Syracuse Orange and the Georgetown Hoyas on February 23, 2013 in Syracuse, New York.
Nate Shron—Getty Images
By John Patrick Pullen

Smartphone cameras have been a blessing, allowing us to capture the moment, any moment — nay, almost every moment — with just the tap of the screen. But the curse that comes alongside all these photos is how they gobble up storage space not just on your handset, but also on your computer.

Part of the problem is that most digital packrats don’t delete the flotsam and jetsam of our daily lives (how long should you keep those blurry snaps of last year’s July 4th fireworks?). But the bigger issue is that the more photos we take, the more files we have. Every Instagrammed latte is another failed attempt at feeding the photo monster.

To take some of the edge off, several popular cloud-based photo storage services have popped up to help you store your precious moments. Here’s a look at five popular choices:

The newest pic product on the block, Google Photos seems to have taken the best of every other service and rolled them into one great offering. But it’s by no means perfect. Available on Android, iOS or through a web browser, Google Photos gives users unlimited free storage for their standard-resolution images. As smooth looking and fluid feeling as you’d expect from a Google-made app, Photos displays, organizes, and shares your pictures better than anything available. In fact, it’s the display and organization where this product really stands out. Categorizing images with People, Places, and Things tags, it uses facial recognition, GPS location, and image search capabilities to make searching your photos easier than ever before.

But the tradeoff for this incredible convenience is privacy. After uploading his photos to Google’s service, Fortune’s Philip Elmer-DeWitt had second thoughts about Google’s use of his data. Be sure to actually read the terms of service on this one before you send your pictures into the cloud.

If you’ve got any Apple handheld product, there’s a good chance that you’re already using this service (and you may not even realize it), through something called “Photo Stream.” This is representative of how convoluted and confusing Apple’s online photo storage options have become. Actually, Apple has two online photo storage solutions: Photo Stream and iCloud Photo Library. The former stores your 1,000 most recent photos in the cloud, making them accessible across all your devices for free. The latter backs up all your photos ever and is free if you only use five gigabytes of space — though who could get away with that little storage? It’s more likely that you’ll have to pay, which ranges from monthly charges of $.99 for 20 gigabytes to as high as one terabyte for $20.

There’s no comparing that to Amazon or Google’s free-for-unlimited-storage pricing, but as far as user-friendliness is concerned, iCloud’s photo storage can’t be beat — so long as you’re purely an Apple user. Integrating into the company’s line of desktop and mobile apps, the service provides almost anything you’d want from a storage service, including access to Apple’s printing service and RAW file compatibility. It even has the ability to hunt down duplicate pictures to cut down on your digital clutter.

Unlimited online photo storage is one of several lesser-known perks of Amazon Prime membership, though non-Prime customers can pay $12 a year for the same deal. Whether it’s through a web browser, a mobile app, or a desktop program, the service lets users beam their pics up to the cloud. Compatible with Android, iOS, Mac, and PC, its cross-platform nature gives users access to their full photo library wherever they are: work, home or on the go.

While the promise of an infinitely large photo collection is alluring, the big knock on this service from current users is that it’s slower than it should be. But if good things come to those who wait, this should be enough (or maybe the speed will improve). Still, Amazon does store photos in their original, full resolution, which makes the unlimited offer attractive to archivists of all stripes.

A longtime favorite for storing files in the cloud, Dropbox released its Carousel app last year to make it easier for users to access web-archived photos. Though it started as one of the first cloud-based storage options, Dropbox’s free offering of two gigabytes is now far under par compared to the competition. The good news, however, is that its one terabyte for $10 per month deal is a better than average value—and if you can’t fill all that space with photos of your kids, you can store other files in there as well.

Carousel excels for those who use a wide range of devices, because Dropbox is compatible with operating systems ranging from Android to Ubuntu. Additionally, Carousel plays nicely with most social networks, letting users post images and videos online without a hitch. And sharing photos with others is as easy with Carousel as it is with Dropbox, which is to say, you can send over secure download links. If recipients also have Carousel, it’s a much better experience, keeping the photo transfer within the app. But since this application isn’t linked to an operating system like iOS or Android, it’s unlikely that you’ll encounter that coincidence.

Yahoo has been working hard to rebuild its image in recent years. One way it’s done that is by making changes to Flickr. A longtime favorite of photographers, Flickr has been storing people’s photos online since 2004, perhaps longer than any other popular service. And because it’s been around so long, Flickr has a lot of features packed into its offering, from an excellent image searching tool (type in “flower” and it will find all your best buds) to in-the-cloud editing options. In order to attract new users, Flickr announced last year that it’s offering a free terabyte of storage for every user. The free option is ad-supported, which means in addition to your selfies, you’ll also be looking at glam shots of models and products, but that’s the price of gratis. 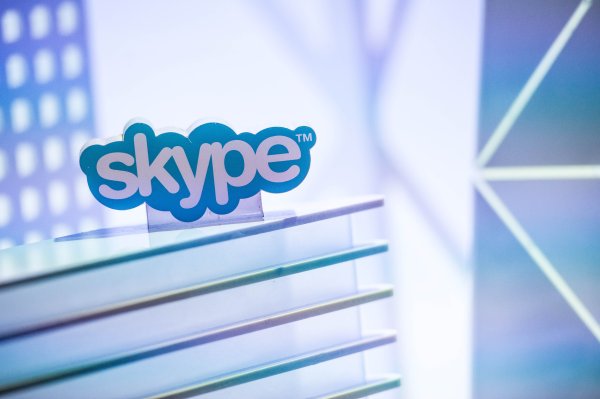 Now You Can Use Skype Right in a Web Browser
Next Up: Editor's Pick