Game of Thrones Watch: Fired Up

Spoilers for Game of Thrones episode The Dance of Dragons follow:

Perhaps on some level, this was always destined to be an odd penultimate hour for Game of Thrones‘ fifth season. The developments of the previous episode—Tyrion and Daenerys’ long-awaited first conversations and the White Walkers’ assault at Hardhome—gave the show a great deal of momentum heading into The Dance of Dragons, but also elevated expectations to exceptionally lofty levels. Save for a few stand-out moments, this episode struggled to meet them. It was by no means one of the series’ weakest episodes, but is unlikely to be viewed favorably when compared with its predecessors Baelor, Blackwater, The Rains of Castamere and The Watchers on the Wall.

The episode was at its strongest—and most heart-wrenching—when it focused on the stretch of land between Castle Black and Winterfell that Stannis Baratheon and Co. are currently inhabiting. The hour opened with Ramsay’s regrettably successful attempt to raid the Baratheon camp. Sure, he and his 20 men didn’t slaughter Stannis, Lady Melisandre, Ser Davos, Selyse or Shireen (no need to have an in-depth discussion of whether she would have been better off being flayed alive or burned alive), but the Bolton raiding party did enough damage to force Stannis’ hand. Just a few short episodes ago, following his moving speech about his fight to save his daughter’s life and their emotional embrace, it would have been unthinkable that Stannis would listen to Melisandre and sacrifice Shireen to the Lord of Light. But Stannis has seen time and time again what happens when he fails to follow her instructions.

After the raid, it was readily apparent that Stannis had made up his mind. Sending Ser Davos on a quixotic mission to procure horses and supplies from the depleted forces at Castle Black was so thinly-veiled an excuse that Davos hardly even pretended to believe it. His final goodbye to Shireen while she was reading The Dance of Dragons (paging Frankie Foreshadowing on that one, by the way) came off as just that, complete with a gift he may have known full-well she’d never have the chance to fully enjoy. Stannis’ final conversation with his daughter was equally tragic. This wise, compassionate girl, who had—consciously or otherwise—fought so hard to survive a disease that killed or ruined nearly everyone else it had ever touched, offered to do whatever she could to help her father. And her offer of help wasn’t made solely as Stannis’ daughter, but also as the Princess Shireen, the very title Stannis had reminded her of a few episodes earlier. She was already a great princess, and you have to ask whether Stannis even considered the possibility that some day she would have made a great queen.

Instead, Stannis’ soldiers dragged her to Melisandre and the child-sized pyre. The decision to pursue this course of action and see it through must have been incredibly difficult for Stannis, but he seemed far content with it than his men, let alone Selyse. Stannis wife had always appeared unimpressed by their daughter, but it was she who broke down and attempted to intervene as Melisandre lit the pyre. The anguished pleadings of a young girl for her father and mother quickly turned to the screams that Stannis never got to hear from Mance Rayder at Castle Black. It’s too bad the Iron Throne isn’t also the world’s most comfortable bed, because Stannis will surely need the latter to fight his inevitable, horrifying nightmares even if he never captures the former.

In a classic Game of Thrones transition, the action immediately shifts from the death of an innocent girl in a snow-covered land to the deaths of not-quite-as-innocent men in a sun-drenched one. The spectacle of the great fighting pit of Meereen proves one well worth waiting for, even if the action inside it didn’t quite match up to come of the show’s previous instances of hand-to-hand combat. In fact, even more interesting than the initial action that took place in the pit (perhaps better known as “Ser Jorah Mormont’s Fight to Exit the Friend Zone”) were the conversations happening just outside of it. The budding rivalry between Daario Naharis and Hizdahr zo Loraq—apparently with Tyrion and Dany stuck in the middle—led to this most damning of all faint praise from the Lannister scion, who told Loraq “My father would have liked you.”

Of course, the rivalry very quickly proved to be a short-lived one, with the Sons of the Harpy staging yet another assault, this one aimed at taking the queen herself off the board. Clearly, there’s no denying the excitement of the scene—kicked off by Jorah firing a spear into the heart of one of the Harpies—but it’s getting increasingly difficult to believe that Dany and her ever-dwindling band of merry men (and Missandei) wouldn’t be more prepared for this sort of attack. This is at least the second large-scale assault that the Sons of the Harpy have staged since Dany took power, and frankly, it’s the perfect occasion for it. When else would they be able to corner Dany and her inner circle in one place filled with a nearly limitless cache of weapons?

On the other hand, if Dany had properly prepared for the possibility of attack, we never would have had need for the return of Drogon. Hearing his screech—pretty much the only thing capable of saving Dany, Tyrion and the others at that point—was a genuine first-pump moment in an episode in dire need of one. Watching Drogon torch the Sons of the Harpy by the dozen was thoroughly gratifying, and it would be great if he could do the same with the White Walkers and Ramsay Bolton very soon (not necessarily in that order). Not quite as gratifying was Dany’s revelation that she could ride Drogon. It was cool to see, but a little surprising after all the build-up, that’s all that it took. And she kinda left the others there to fend for themselves. Still though: Daenerys Stormborn of the House Targaryen, the First of Her Name, the Unburnt, Queen of Meereen, Queen of the Andals and the Rhoynar and the First Men, Khaleesi of the Great Grass Sea, Breaker of Chains, and Mother of Dragons riding a freaking dragon. Pretty cool.

And now for the customary hail of arrows:

Read next: Game of Thrones Showrunner on the Horrifying Death Scene: ‘It’s Supposed to Be Awful’ 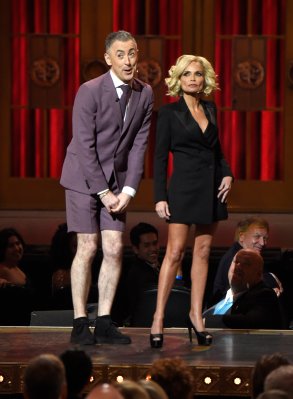 Watch the Showstopping Opening Number at the Tonys
Next Up: Editor's Pick