The screams are what get you. It’s more like thunder. As American Pharoah galloped to the finish of the Belmont Stakes on Saturday, comfortably ahead of the field, 90,000 fans let out a cathartic roar. The noise thrusts through your system. Some men and women tossed their hats, as if they had just graduated from the school of Triple Crown sadness.

Indeed, when a Belmont crowd falls silent after getting itself so jacked up, only to realize that the Triple Crown hopeful wasn’t going to win, the emptiness carries an element of despair. But there was no disappointment on this day: American Pharoah accomplished what 13 prior horses who’d won both the Kentucky Derby and Preakness Stakes since 1978 haven’t been able to do. He won the first Triple Crown in 37 years.

So a bummed out crowd didn’t file out of the Belmont. Instead, after American Pharoah clinched it, other jockeys held up their cell phones on the side of the track, to snap a shot of the historic victor trotting by. Security guards who’ve been working at Belmont Park for more than 30 years cried in the winner’s circle.

In the bowels of racetrack, over an hour after this race, American Pharoah’s Hall-of-Fame trainer, Bob Baffert, cherished watching a replay. Even on TV, he could feel the thunder. “Just listen to that crowd,” he said.

This was Baffert’s fourth, and maybe last, shot at a Triple Crown. “Coming in, we thought this was probably it,” says his wife, Jill. Baffert came unfairly close to winning it in 1998, when Real Quiet lost by a nose at the Belmont. “That was real brutal,” Baffert said. “Real brutal.”

About an hour before the race, Baffert admitted the nerves were getting to him. “It’s a lot of pressure,” he said, standing in front of a Belmont barn. “A lot of pressure.” Still, Baffert, sporting a smart red tie and his signature white mop, oozed calm. It started the night before, when he went to dinner with his pal Joe Torre, the former New York Yankees manager—and a fellow Hall of Famer—at a Midtown steakhouse. “He was cool as a cucumber, man,” says Torre. “A lot cooler than I would have been before Game 7, I’ll tell you that. He knew this horse was something special from the get go.” Torre offered to skip the Belmont, since he wasn’t at the Derby or Preakness. He didn’t want to put a whammy on American Pharoah. But Baffert insisted that he come to the race.

Jill said her husband slept a little later than usual: he woke up at 8. They split an almond croissant for breakfast, and wanted to leave their Manhattan hotel at 11:30 a.m. for the track. But they kept putting it off. “It was like having a baby,” Jill says. “You have to push.” Baffert forgot to take his heart medication.

Trainer, Bob Baffert, of American Pharoah #5 celebrates with the Triple Crown Trophy after winning the 147th running of the Belmont Stakes at Belmont Park on June 6, 2015 in Elmont, N.Y.
Streeter Lecka—Getty Images

While the barns of past Triple Crown contenders Big Brown and California Chrome had a beer-soaked party vibe on race day, things were quiet at the American Pharoah stall. Baffert’s all business. He arrived at American Pharoah’s barn before the race, walking hand-in-hand with his 10-year-old son, Bodie. A rep from Monster, the energy drink company that parachuted in to sponsor the horse this week, asked if he wanted to wear a Monster pin. Baffert politely declined. “It’s superstition,” he said. That, and Baffert clearly wasn’t about to shill on this special day.

American Pharoah’s barn faced Hempstead Turnpike on Long Island, giving the horse a lovely view of a Subway, Wendy’s, and the Tobacco Junction. He took a bath; Baffert and the team liked what they were seeing. “Dude,” Baffert told jockey Victor Espinoza. “He’s ready.”

“I looked at my wife in the post parade and I told her, ‘get ready to be the owner of the 12th Triple Crown winner,” says Ahmed Zayat, the outspoken and controversial American Pharoah owner, whose gambling lawsuit against him was thrown out last Thursday. “He looked unbelievably focused. Honest. Relaxed. Full of energy.”

Baffert stayed loose, tying Bodie’s shoes, adjusting his tie, and talking about how nervous Bodie was. He joked about how silly it was that horses linger around the track for about a half-hour before getting in the gate. “If there was a horse’s union,” Baffert said, “They’d say, ‘no way.'”

Once the horses finally did take off, American Pharoah jumped to a quick lead. “Once he came out of the gate, one length, I said, ‘wow,'” says Espinoza, whose romantic life landed him on the front page of the New York Post on Saturday. As American Pharoah turned for home, Baffert and his wife still weren’t convinced he’d hold the lead. “I was prepared for somebody coming because I’ve gone through this so many times,” he says. “It was just a little bit of disbelief,” adds Jill, through tears. “I just wanted him to stay where he was.” American Pharoah fulfilled her wish.

Once Baffert knew his horse would hold on, “All I did was take in the crowd,” he says. “The crowd was just—it was thundering and I was just enjoying the call and the crowd, the noise and everything happening. Thirty-seven years, I’m part of this but you know what, that little horse, he deserved it.”

“What the Triple Crown is about, we just get to share greatness with everybody,” he continues. “Everybody got to see it.”

So will this Triple Crown victory boost horse racing? Sure, American Pharoah hysteria will shower attention on the sport. But it’s doubtful that any more casual fans will flock to the track on a weekday afternoon. The sport craves a millennial audience; the bowties, beards and fedoras were out in full force at the Belmont. But now that we’ve all seen history, will the hipsters jump off the bandwagon? “All these jet-setters, trendizoids and freakizoids know nothing about horses,” says Curtis Sliwa, the founder of the Guardian Angels citizen patrol group—and a New York City radio host—as he scans the crowd, wearing his red beret. He’s been coming to the Belmont for some 20 years. “But without them, horse racing dies.”

For the moment, forget about horse racing’s future. Saturday was a celebration of a once-in-a-generation athlete, and a respected leader who finally won his sport’s elusive prize. Afterwards, Baffert talked about the hundreds of texts he had already gotten, from around the world. Someone asked Baffert about his plans for the next few days. “Well, I was prepared for an ass-kicking and to go home,” he says. Instead, he’ll be sticking around New York, and was off to a champagne celebration. He and his horse are the toast of the city. The toast of sports. 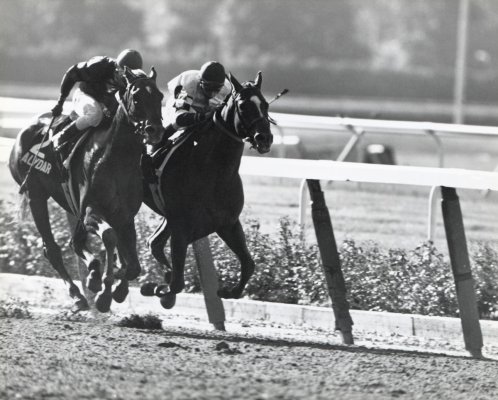 See All 12 Winners of the Triple Crown
Next Up: Editor's Pick