Review: Orange Is the New Black Spotlights the Mothers of Detention

It can be easy to forget, given how vast the ensemble of Orange Is the New Black is, that it’s a story about isolation. Not the solitary lockup kind–though it happens–but the social and emotional kind.

Each of the prisoners at Litchfield has, or had, loved ones outside; each is someone’s daughter and many are someone’s mother. Some of them work to maintain their connections, some let them go, some substitute family-like bonds with other inmates. But regardless, being cut off from family is part of the sentence: children grow, parents age, the problems at home go on even if you can’t do anything about them. Incarceration, in this women’s prison, is a mother.

In season 3 of the Netflix series (debuts June 12) mother-child connections–actual, potential and surrogate–are everywhere, making, at least in the first half, for a story that’s lighter than the tension-filled season 2, yet richly emotional. (Netflix sent critics six episodes of thirteen in total.)

The season opens with the annual Mother’s Day visitation. (If you’re keeping a calendar, only months have passed since season 1, which ended around Christmastime.) It’s an elegant beginning, drawing a sweep of the huge ensemble and bringing the running stories up to speed. The prisoners’ society and power structure is adjusting to Vee’s run-in with Rosa’s van at the end of season 2; Caputo is running Litchfield and inheriting all its obvious and hidden problems.

Mother’s Day itself, meanwhile, shows what an intimate punishment prison is–in a way, for loved ones outside as well. The visit is a party but not a carefree one. Kids walk in past guards giving warnings; they have to punch a piñata with their fists because no one can have wooden sticks in a prison; they witness first hand how their mothers are under control, having to come, go and drop to the ground on command. The day is a little escape for the prisoners, and it’s a little imprisonment for their kids.

The theme doesn’t apply only to the show’s literal mothers, though. Red (Kate Mulgrew) has become a kind of surrogate tough mom to many inmates, especially Nicky (Natasha Lyonne), who tests the relationship. Dayanara (Dascha Polanco) is still very, very pregnant and anxious about what comes after childbirth (“This inside me, it feels like a grenade”), a question season 3 complicates early. And Suzanne “Crazy Eyes” (Uzo Aduba), who invested so totally and needily in Vee, is foundering in her absence.

But the season kicks off less gloomy, and more flat-out funny, than the last year’s. Season 2’s focus on Litch’s race-clique battles helped build the show’s scope; if season 1 built empathy for prisoners, season 2 reminded us–both in present tense and flashbacks–that they’re not simply all victims of circumstance but women who have often done terrible things, not always for defensible reasons.

Season 3 expands the picture even more, bringing in yet more characters (including a quasi Martha Stewart figure heading to Litch after a highly publicized trial) and giving flashbacks to several old ones who hadn’t been featured yet–a flashback for Chang (Lori Tan Chinn) opens up a character who’s been an enigma for two seasons. It points up the show’s greatest strength: it has dozens of characters any of whom you could imagine hoding down a fascinating show on their own.

Meanwhile, it divides time wisely among the show’s vast existing assets: though Alex (Laura Prepon) has returned as a regular, Piper (Taylor Schilling) has become one part in the ensemble, representing a certain upscale-liberal viewer sensibility while giving other characters a chance to push back against it. (Red, for instance, who tells her, “Stop trying to mold the world into the one inside your pointy blond head.”)

If OITNB has a problem at this point, it’s that its world-building is so strong there’s too much material: the episodes tend to run near a full hour and yet feel jam-packed. Even characters who have moved on, permanently or temporarily (sorry, Pornstache fans) are still felt in the plot. And that’s before we get to the other running themes of the show, like the economic side of the prison industry, which gets special attention in a season arc that I won’t spoil here. OITNB has a lot of time but even more to say. Even if it sometimes builds soapboxes and strawmen (Taryn Manning’s Pennsatucky sometimes exists to be a fake-toothed mouthpiece for Ignorant Conservative America), it remains as fresh and interesting as when it began.

There’s always an argument, come awards time, about whether OITNB is a drama or comedy. But its strength has always been to be wholeheartedly both, which is maybe the only way to tell its tough-love story–to engage with characters who can be both sympathetic and terrible, to describe a personal and institutional situation that is messed up top to bottom, with plenty of blame to go around.

And in this world, the blame begins before you’re even born. As Daya stresses over her baby’s looming due date, her jailmate and mother Aleida (Elizabeth Rodriguez) tries to be as reassuring as she can. “It’s not all bad,” she says. “You end up with a baby. It just ruins your life, is all.” Awwwww. Happy Mother’s Day, Litchfield! 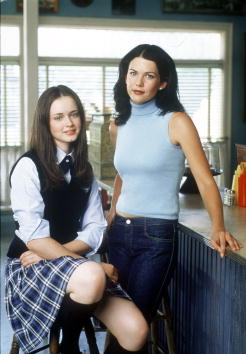