Will Democrats Keep Their Early Voting Advantage in 2016?

At a historically black college in Texas some seventeen months before the 2016 presidential election, Democratic frontrunner Hillary Clinton laid out a case for expanding voting access that was both moral and practical. She called for creating universal, automatic voter registration and expanding early voting to 20 days in every state, harshly criticizing recent Republican legislative efforts to roll back election reforms.

“We should be clearing the way for more people to vote, not putting up every roadblock anyone can imagine,” Clinton said. “I believe every citizen has the right to vote and I believe we should do everything we can to make it easier for every citizen to vote.”

For Democrats, it’s an obvious rallying cry. Observers from both parties agree that the Obama campaign won in 2008 and 2012 in part by increasing turnout through early voting. But some Republicans think their party may have finally caught up, greatly reducing the partisan benefit for Democrats. It remains to be seen, however, whether Republican state lawmakers in charge of election laws will see the issue the same way.

Republicans are gearing up to increase early voter turnout in 2016, building on the party’s efforts in the midterms. Thousands of GOP staff and volunteers knocked on doors in the run-up to the 2014 election and targeted voters with absentee ballot applications and pledge cards. The Republican National Committee grew its email file from 2 million to 12 million addresses during the midterms, began a Facebook “Voter Challenge” that targeted likely voters and pushed absentee ballot requests to voters in droves.

“In 2014, our ground game was redesigned to put an emphasis on early voting and turning out different voters than we have in the past,” said RNC spokesman Michael Short. “2016 will be all about building on the successes of 2014 and scaling up our efforts for a presidential cycle.”

While the dynamics in midterms are different than in presidential election years, the advances Republicans made in early voting are likely to expand in 2016.

“Colorado and Iowa are the canaries in the coal mine for the future of early voting,” said Michael McDonald, a senior fellow and elections expert at the moderate Brookings Institution. “Whatever advantage Democrats have in early voting, that’s going to narrow as Republicans adapt.”

Some Democrats argue that they still have an advantage, attributing their losses in 2014 to overall turnout problems in 2014.

Indeed, when it comes to in-person early voting, Democrats appear to still have a significant advantage. In-person voting helped Democrats dominate early voting efforts in 2008 and 2012. Democrats motivated voters on the weekends before election days and pushed turnout by busing voters to polling places and targeting African Americans on Sundays in an effort dubbed “souls to the polls.”

In her speech, Clinton notably pushed for 20 days of early in-person voting, rather than absentee ballots, a form of early voting that tends to favor Republicans.

“We should set a standard across our country of at least 20 days of early in-person voting everywhere, including opportunities for weekend and evening voting,” said Clinton. “If families coming out of church on Sunday before an election are inspired to go vote, they should be free to do just that.”

Clinton did not explicitly accuse Republicans of trying to reduce turnout among Democrats. But she did call out likely Republican presidential candidates for changing voter laws, including former Texas Gov. Rick Perry, Wisconsin Gov. Scott Walker, New Jersey Gov. Chris Christie and former Florida Gov. Jeb Bush. Nonpartisan groups as well as Democrats say that the laws discriminate against minorities and have fought back in the courts against restrictive voting laws.

In the past decade, however, the partisan nature of the battle between Democrats and Republicans in courthouses and state legislatures all across the country has become increasingly apparent. The goal—to make sure their own party outvotes the other—is simple. The means are less straightforward. Republican-led legislatures in states like Wisconsin, North Carolina and Texas have reduced early voting days, required voter identification, limited same-day registration, or all of the above. Meanwhile, Democrats have pushed back in court, seeking to expand voting by bringing lawsuits and changing legislation.

Read More: Democrats Play Hardball on Voting Laws Ahead of 2016

The Clinton own campaign’s lawyer, Marc Elias, is behind new lawsuits against Republicans in Wisconsin and Ohio. (The Clinton campaign says it is not involved in the suits.) The DNC has promised to battle what it views as voter suppression, and a slew of legal actions are likely to hit the courts in the coming months in states like Virginia and Georgia.

“Today, Republicans are systematically and deliberately trying to stop millions of American citizens from voting,” Clinton said in her energetic 30-minute speech. “What part of democracy are they afraid of?”

While research indicates that voter ID laws and cutting same-day registration in theory would disproportionately hurt minorities and young people, the evidence on early voting is less clear. A 2013 study that measured voter turnout in 2004 and 2008 showed that states that implemented early voting without same-day registration saw a decreased overall turnout: spreading out voting over many weeks weakened voter enthusiasm on Election Day, when buttons on lapels, stickers, neighbors, local churches and schools are all reminders to vote.

“What encourages people to come to vote is that they’re excited about the candidates and they think it makes a difference,” said Paul Gronke, an early voting expert at Reed College. “Other than Election Day registration, voting laws don’t make huge differences.”

But the GOP and the Clinton campaign are closely eyeing legal action across the country. “It’s total war and they’re fighting over every piece of territory,” Gronke continued. “The two sides are not really sure whether voting laws make a big difference. But they have the money and the lawyers, so why not litigate on it?” 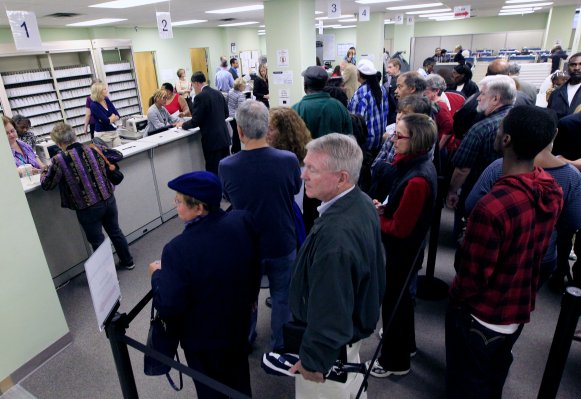 Democrats Play Hardball on Voting Laws Ahead of 2016
Next Up: Editor's Pick