These Are the 5 Facts That Explain the FIFA Scandal

The U.S. cracking down on international football’s governing body looks like a recipe for geopolitical disaster. Fortunately, the only thing the world hates more than American unilateralism is corrupt officials compromising the integrity of the world’s most popular sport. These five facts explain the FIFA scandal and the geopolitical implications of this growing story.

Nine FIFA officials were indicted last week by the U.S. Department of Justice for taking $150 million in bribes while awarding FIFA broadcast rights. This kicked off a Swiss investigation into the bidding process for the 2018 Russia World Cup and the 2022 Qatar World Cup. Since the story broke last week, FIFA president Sepp Blatter has managed to win reelection and then resign his post.

For years the worst-kept secret in sports was FIFA’s extensive ‘patronage’ system. Blatter is accused of using FIFA development money, earmarked for promoting soccer in impoverished nations, to secure votes and general support for his initiatives. FIFA generated nearly $6 billion over the last four years—that’s a lot of money to work with.

Each of the 209 FIFA member nations casts a single vote for the body’s president. This system gives smaller countries outsized influence—a vote from Lesotho weighs exactly the same as a vote from Germany. When news broke of the DOJ investigations, the African Bloc and all of its 54 members immediately announced their support for Blatter and the current system.

Some African countries have more skin in the game than others. U.S. investigators have accused South Africa of paying $10 million to secure rights to the 2010 World Cup. The South African response? “We have fought colonialism and defeated it, and we still fight imperialism,” proclaimed Fikile Mbalula, South Africa’s minister of sport. A tournament that netted just $500 million for South Africa after $4.6 billion were spent in preparations may well prove more trouble than it was worth. In fact, there is scant evidence that hosting major sports tournaments ever pays off economically for countries.

Yet some countries happily pay the high costs of hosting in exchange for the prestige it brings—and some governments are even happy to foot the bill for the distractions these selections bring. Take Russia, which is having a particularly rough year. Oil prices, on which Moscow is highly dependent, have dropped 48% since last June; the ruble has lost nearly half its value since the beginning of 2014; Western sanctions have sent food prices soaring across the country. Vladimir Putin needs the 2018 World Cup to boost morale, tourism and investment, and Russia is set to spend $20 billion on public works projects and stadium preparations. The good news for Putin: despite the unfolding FIFA scandal and the light it will surely shine on Russia’s bid for the event, it’s probably too late to strip Russia of the World Cup.

The 2022 games are another story. Qatar is so heavily invested in their World Cup hosting duties that its stock market dropped 3 percentage points on news of Blatter’s resignation. Qatar is expected to spend about $200 billion over a 12-year period upgrading its infrastructure and building stadiums.

The Swiss investigation puts all that in jeopardy. Prosecutors have reportedly uncovered emails that show Russia and Qatar supporting each other’s bids, perhaps with bribes. Qatar needed the help—this is a country that averages 105-degree temperatures in June and has a strict no-alcohol policy. A football fan’s paradise, in other words.

Hosting an international sports event like the World Cup is a big deal for this nation of 2 million. The Qatari response to the ongoing FIFA scandal? “Is it because it is an ArabIslamic small country? That is the feeling of the people in the region,” opined Sheikh Abdullah bin Nasser bin Khalifa Al Thani, the Prime Minister of Qatar.

Given all these sensitivities, it’s surprising how well much of the world is taking this U.S.-led assault on world football’s governing body. Perhaps that’s because just 6% of Americans say soccer is their favorite sport—the perception that Americans don’t care about soccer gives Washington and the DOJ some semblance of objectivity in these proceedings.

Yet it isn’t realistic to think that, when it comes to organizations like FIFA, sports can ever remain separate from politics. No sovereign power oversees FIFA so its members must essentially govern themselves, leaving countries to investigate highly sensitive activities involving other countries. But for many Americans, there is a silver lining: scandals involving international bureaucrats are a lot more fun than watching soccer. 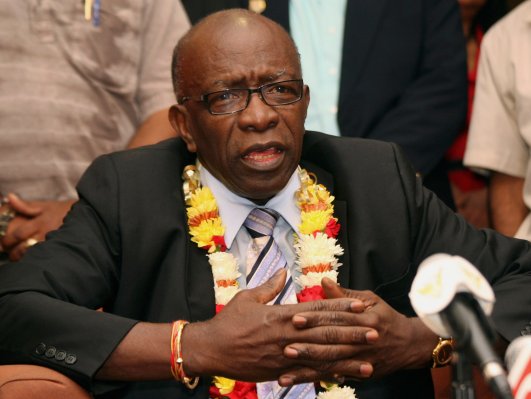