In a speech in a Dallas suburb, the long-serving Texas governor attempted to turn back the clock on his failed 2012 attempt, which foundered when he fell short against other Republicans in debates, famously forgetting one of his own campaign platforms mid-answer—his “oops” moment.

On Thursday, Perry said, “It’s time for a reset.”

“We have the power to make things new again,”he said, “to project America’s strength again and to get our economy going again. And that is exactly why I am running for President of the United States of America.”

Perry has sought a low-key rehabilitation, seeking to rebuild his reputation with interviews meant to show his command of the issues. As a former governor, he also hopes to differentiate himself from a field thick with Republican senators, including Sens. Marco Rubio, Rand Paul, Ted Cruz and Lindsey Graham.

During his speech Thursday, Perry called Texas the “engine of growth” under his leadership and noted his record as governor, highlighting his handling of last summer’s crisis involving unaccompanied minors crossing the Southwestern border.

“If you elect me your president, I will secure that border,” he said.

Still, he faces some trouble back home, as a Texas grand jury indicted him last year on two abuse-of-power charges which claim he broke the law when he threatened and vetoed funding for a district attorney who was arrested for drunk-driving. Perry has denied wrongdoing and called the indictments politically motivated.

In a brief one-minute video posted ahead of the speech, Perry said the United States was showing “weakness abroad” and a “slow recovery economically” and said he would “bridge the partisan divide.”

Perry currently polls at the bottom of the Republican pack, picking up an average of 2.7% support in the Real Clear Politics average of polls. That puts him right at the cusp of being invited on stage at the official GOP debates, which are being limited due to the unusually large field. 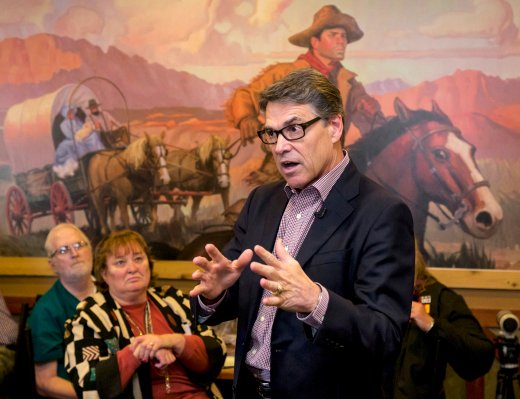