Ikea has seen its net income increase 31% in the past five years, a tribute to its popularity with customers. But there’s one area where the furniture retailer isn’t resonating with consumers as much as it would like: social and environmental responsibility.

The Swedish company wants to change that. On Thursday, Ikea said it plans to spend €1 billion — or $1.13 billion — on renewable energy and aid to poor nations coping with climate change.

The company will invest €600 million in wind and solar power; that’s on top of the €1.5 billion it has invested since 2009. It also plans to plant as many trees as it chops down by 2020. Its charitable arm, the Ikea Foundation, will invest €400 million by 2020 to combat the impact of climate change in vulnerable nations.

As Fortune reported in March, Ikea, which uses 1% of the world’s commercially logged wood, has already gone to great lengths to try to infuse sustainability into its operations. Its roofs are outfitted with 700,000 solar panels and will soon operate 314 wind turbines in nine countries, putting the company on track to be energy independent by 2020. At the company’s factory in Älmhult, Sweden, leftover wood scraps are sold to the energy company EON to heat the community. Stores recycle the soft plastic film used in plastic packaging to make the Skrutt desk pads the company sells. By September 2015, the company will have phased out all non-LED light bulbs in its stores, and it’s starting to sell solar panels. In the last fiscal year, sales from its products that encourage more environmentally-friendly lifestyles surpassed more than $1 billion.

Even so, a survey conducted last year found that 41% of Ikea customers consider the company one that “takes social and environmental responsibility.” Ikea wanted that percentage to reach 70 by 2015, Reuters says.

Ikea’s chief executive Peter Agnefjall said the environmental push announced Thursday will not increase prices at its stores. The company wants to hit €50 billion in sales by 2020; it raked in €28.7 billion in fiscal year 2014. 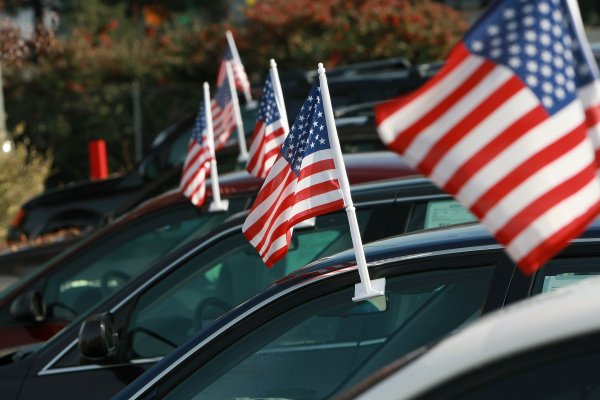 Why It'll Take You Forever to Pay Off Your Car
Next Up: Editor's Pick