Marvel Comics To Launch a New Generation of Super Heroes

A few months ago, Marvel turned its existing universe on its head by unveiling Secret Wars and introducing Battleworld—a new planet comprised of the remains of the collision between the traditional Marvel 616-Earth universe and Ultimate universe. Now, on the heels of Secret Wars comes another new initiative for readers: The All-New All-Different Marvel.

“This is the Marvel Universe,” Editor-in-Chief Axel Alonso said in a press statement. “This fall, we will be inviting readers into a universe comprised of bold new landscapes populated with characters and teams both familiar and brand-new.”

“This is going to be an absolute game changer for Marvel,” added David Gabriel, SVP of Sales & Marketing. “Similar to the most successful comics industry program of this century—Marvel NOW!, All-New All-Different Marvel is going to be presenting fans new No.1’s for every title coming out during this event. This is a brand new beginning that honors our past 76 years, yet takes a bold step with daring, and accessible, entry points.”

Alonso attributes the emergence of All-New All-Different Marvel to the massive success of female-led titles, notably recent books like Jason Aaron’s Thor (which has currently sold over 200,000 copies) and G. Willow Wilson’s Eisner-nominated Ms. Marvel, which topped the NY Times Best Seller list in addition to being the best-selling Marvel digital comic of 2014. “She [Kamala Khan] is Peter Parker for the 21st century,” Alonso explained to EW. “Peter Parker can be a 16-year-old Pakistani girl from Jersey City. If her story is universal, then people are going to come and read it. If it feels true, if it resonates, people are going to come.”

This emphasis on collective storytelling is how Alonso and Marvel are looking ahead to the changes facing the Marvel universe, and with top creators including Brian Michael Bendis, Jason Aaron, Mark Waid, Dan Slott, Charles Soule, G. Willow Wilson and Jeff Lemire—along with many others—taking the reigns, Marvel is ensuring that the stories of this new universe will be in talented hands. Entertainment Weekly spoke exclusively with Alonso to get the details on what this development means for present and future Marvel titles, and what new characters we can expect to see going forward.

EW: You recently changed the Marvel Universe entirely with Secret Wars, so how did the impetus for All-New All-Different Marvel come about?
AXEL ALONSO: For starters, we’re in the midst of a massive universe transforming event in Secret Wars. This is an event we’ve been building to for some time, and it’s clearing the canvas and putting new and familiar stuff on the canvas in its aftermath. And so it’s transformed the Marvel Universe we’re looking at, which is the perfect opportunity to start a new chapter. And that said, most importantly, I think that the comics industry—certainly, we are—slowly working into a season model that’s not too unlike what we see in our favorite cable TV shows: a seasonal model that offers accessible entry points for new readers and is respectful of long-term fans. We did Marvel NOW! and All-New Marvel NOW!, which were both two very successful campaigns. And this is the latest campaign. The goal is to invite a new audience while maintaining and honoring the fans who are already reading. So this fall, this All-New All-Different Marvel is going to unveil somewhere around 60 titles, all new No.1s. And nothing says “jumping point” like the No.1. And all of them, I think, all are going to offer diverse, exciting and accessible entry points into our world. And there’ll be a lot of different flavors.

The biggest question coming out of this announcement will undoubtedly be whether or not this development affects existing Marvel titles. Will All-New All-Different Marvel build on the current stories we’re reading?
It will affect all titles across the board. The event is transformative, and when we pick up after the event with No.1s, the goal is that some time will have past and all your favorite characters will be in a new place. The event will have universe-wide ramifications, of course, but there will also be changes in the lives of the characters themselves that will be revealed and then explained over time—changes in their relationships, everything mundane as they might have a moved, to they might have a new sidekick, to it might be a new person inside the tights. Our goal is to knock readers back onto their heels and raise some eyebrows, the way we did when we unveiled Kamala Khan as the new Ms. Marvel or the female Thor, or an African-American Captain America…or more recently, the all-female Avengers team. That’s the goal, to challenge and take people out of their comfort zone and have some fun.

Which is what fans should be excited about—change, and the evolution of their favorite characters!
Yeah, very much so. I think it’s a good time to be a long-time fan because we have top creators who are going to be telling inspired stories of everyone from Spider-Man to The Avengers to the Hulk. We’ve had a lot of time to plan for this, so as I said, there’s going to be a lot of new developments. I’ll go ahead and tell you the Marvel Universe is about to see the arrival of an All-New Hulk—not a Hulk that you’ve seen before. And this development is deeply rooted in story. I am personally excited about it and its ramifications and it’s a fascinating story that I think Bruce Banner fans will definitely want to read. You’ll also see the arrival of a new Spider-Man in the Marvel Universe and you’ll also see—spoiler alert—a Wolverine emerge on the scene. I’m not going to say who, but a Wolverine that is certain to provoke reactions. And we’re very excited about it. We’ve been talking about it for some time, and we have really great stories to tell with all of these. And again, that’s just the tip of the iceberg. There’s other stuff coming up: the long-overdue arrival of beloved characters in new ongoing series by incredible creative teams, new teams will arrive in the Marvel Universe that will have really cool mandates and mission statements and be composed of some alarming characters. So we have some great stuff ahead.

I’m assuming that like Secret Wars, which creators knew about long before you unveiled it to the public, you’ve been planning this for some time, which in turn has helped writers and artists craft their Secret Wars stories.
Secret Wars is planting the seeds or laying down the building blocks for the new Marvel Universe. Nothing we do in Secret Wars is irrelevant for how the Marvel Universe will be moving forward. So whether it’s characters, places, artifacts that are introduced in Secret Wars, all those are going to be a part of the blend of the Marvel Universe moving forward. So keep an eye on characters like Old Man Logan, the Maestro from Future Imperfect, keep an eye on key characters, key places, key artifacts—because it could very well be that they’re here to stay, to complicate things going forward.

All-New All-Different Marvel is being billed as the perfect accessibility “jumping off” point for both new and old fans. And Marvel is doing some really great things right now with all their books, especially when it comes to embracing diversity and its success of female-led titles. No matter how long you’ve been reading comics, it really is the perfect time to be involved.
Absolutely. And the thing is, when we look at the way that All-New Thor connected with readers—I just had Margaret Stohl, who wrote the Black Widow novel, in my office about ten minutes ago. She was in and we were just chatting, and it was interesting because she was saying how deeply the female Thor connects with her kid and her kid’s friends and her daughter, and she just went on and on. And how that character resonated with fans was an incredible validation for us. Because as we were doing it and we knew it was a risk, it was a chance. It was rooted in story, but at the end of the day, we didn’t really care what was going on in the movie. We saw the power of challenging readers to look at Thor in a new way, and the notion of being worthy. And I’ll just say that I’m really excited with the way that people have embraced that. And the strength was rooted in story, and that’s why I’m confident about these things I’m alluding to in the future, these changes we’re making in the Marvel Universe. They’re rooted in story and we’re going to back it up the same way we did with the female Thor or Ms. Marvel. 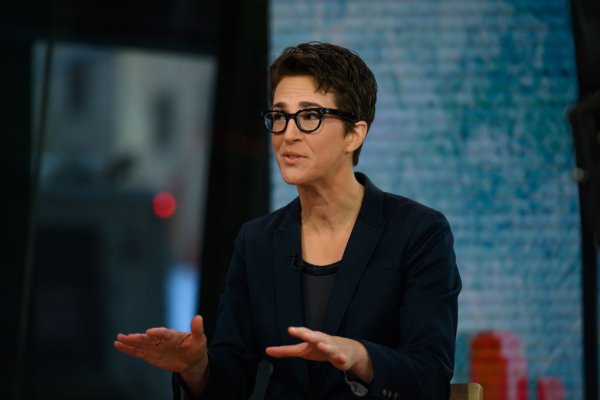 MSNBC's Rachel Maddow to appear in the CW's 'Batwoman'
Next Up: Editor's Pick