“I renew my commitment to track Boko Haram into a corner, to destroy it. Five years of the presence of this evil sect is enough,” the 72-year-old told reporters in Niamey, Niger, accompanied by his opposite number, President Mahamadou Issoufou. Buhari said he also planned to visit neighboring Chad on Thursday, Reuters reports.

Niger has recently stepped up efforts to help its neighbor combat Boko Haram in the northeast part of the country, but Buhari indicated that arrangement would end soon. “I think in the next four weeks we will be able to replace them with Nigerian forces so they can return to their country,” he said. He also credited Niger for accepting refugees — as many as 150,000 — who have fled the fighting in Nigeria to Niger.

Nigeria and neighbors Chad, Cameroon, Niger and Benin will also launch a new multinational effort to fight the insurgency around Lake Chad using a force of 8,700 troops, Issoufou announced at a separate event Tuesday. The neighboring nations will provide additional weapons to Nigeria and will help rebuild infrastructure damaged by recent fighting.

Founded in 2002, Boko Haram, which means “Western education is forbidden,” launched a vicious insurgency in 2009 but only garnered global attention after the abduction of more than 250 schoolgirls from the town of Chibok in April 2014. 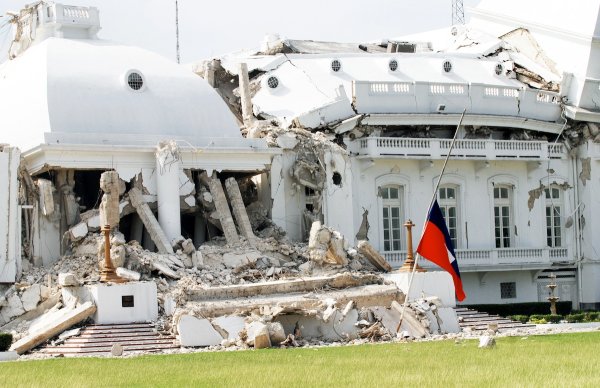 Red Cross Spent $500 million to Build 6 Homes in Haiti
Next Up: Editor's Pick