He might not yet be a household name, but the 28-year-old Batiste boasts an impressive resume. Born into the New Orleans jazz family featured on the HBO series Treme, Batiste grew up immersed in music, playing percussion from a young age before focusing on piano. He began performing at age 8 and released two albums by 17. Since receiving both undergraduate and graduate degrees from Julliard, he has performed in more than 40 countries, counting Prince, Lenny Kravitz and Wynton Marsalis among his collaborators.

Though his primary gig may be music, Batiste has also dabbled in acting, appearing in Spike Lee’s Red Hook Summer (2012) and playing himself on Treme. Currently based in New York City, Batiste also serves as Artistic Director at Large of the National Jazz Museum in Harlem, finding new audiences for the museum and performing outreach in schools and communities.

Batiste comes as part of a package deal: While he will be the bandleader, he’ll be backed by his current band, which includes a saxophonist and a percussionist, as well as a tubist. Known together as Jon Batiste and Stay Human, the band formed shortly after Batiste graduated from Julliard.

Together with Stay Human, Batiste has developed a method of performing he calls “social music.” During shows, the band often brings audience members onstage or turns the performance into an impromptu street parade. “We call those moments love riots,” Batiste explains on his website, “because the energy is so kinetic and big. It’s people coming together who don’t know each other, and it’s so beautiful.” Social Music is also the name of the band’s 2013 album, which reached the top spot on Billboard’s jazz charts.

Though it’s still early to speculate on what the partnership between Colbert and Batiste will look like, it seems safe to bet on at least one defining characteristic: mobility. Whether during a “love riot” or just performing his music onstage, Batiste is an incredibly vibrant, mobile performer, and it won’t come as a surprise if he chooses not to stay confined to one corner of Colbert’s set.

The Late Show with Stephen Colbert debuts Sept. 8. May it be a long and happy marriage of music and comedy.

Watch Jon Baptiste and Stay Human perform “Express Yourself” on the Colbert Report in 2014: 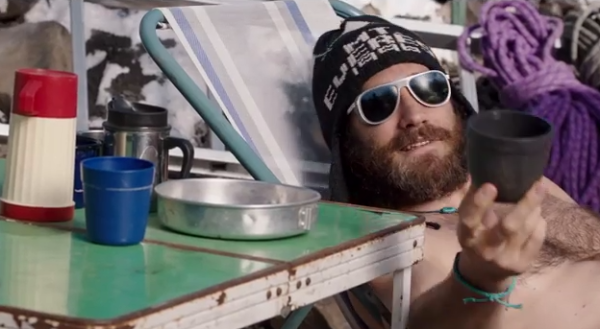 Watch Disaster Unfold in New Trailer for Everest
Next Up: Editor's Pick