What Sheryl Sandberg Learned About Motherhood Through Grief

Grief sends some people scurrying into isolation and silence; the pain makes them want to shut out any light or human connection. Sheryl Sandberg is not one of those people.

In a heartrending post on Facebook, under a photo of her late husband Dave Goldberg and her in a particularly, now gutwrenchingly, carefree moment she talks in depth about grief and how it feels. “I have lived thirty years in these thirty days. I am thirty years sadder. I feel like I am thirty years wiser,” she writes.

It’s a very Sandbergian post, full of things she’s learned and hopes to pass along. But it’s also quite unSandbergian: raw and much less levelheaded than the cool, reasonable tone of Lean In. “I still hate every car that did not move to the side, every person who cared more about arriving at their destination a few minutes earlier than making room for us to pass,” she writes of her ambulance ride to the hospital with Goldberg.

One of the things Sandberg addresses first is what she has learned about motherhood. “I have gained a more profound understanding of what it is to be a mother,” she writes, “both through the depth of the agony I feel when my children scream and cry and from the connection my mother has to my pain.” To be a mother, she suggests, is to double down on the pain. But to be a mother is also to have a potential source of joy. “As heartbroken as I am, I look at my children each day and rejoice that they are alive,” she writes. “I appreciate every smile, every hug.”

The Sandberg family has always been tight knit. Her sister lives close by and her parents, who reside in Florida, are very frequent visitors to the Bay Area. Spend any time with Sandberg’s parents and you’ll realize that her father is the calm, steady brainy one and her mom, while also whipsmart, is the passionate, activist one. And she’s the one Sandberg thanks first.

“She has fought to hold back her own tears to make room for mine,” Sandberg writes. “She has explained to me that the anguish I am feeling is both my own and my children’s, and I understood that she was right as I saw the pain in her own eyes.” She goes on to say that her mother has been lying in bed with her at night, “holding me each night until I cry myself to sleep.”

While expressing grief so openly and vulnerably on Facebook may seem a strange thing to do—has any other COO of a huge multinational media concern ever used their own company’s product for such purposes?— it’s not at all uncommon. Since the disappearance of most of our public mourning rituals, such as wearing black armbands or veils or wailing in the public square, social media has become one natural replacement.

Facebook is already used for checking in with folks, displaying evocative photos of a loved one, reminding the world at large of the amazingness of a certain person. So while experts do not agree about whether public expressions of bereavement are always healthy, for those for whom it’s helpful, social media would seem to be a boon. Especially since farflung friends of the bereaved can be regularly expressing condolence and support without being intrusive.

Grief is a nasty, wily changeling, and can overcome people without much warning. Sandberg acknowledges she can’t always been the rejoicing, expressive, I’ll-make-everyone-feel-comfortable mom. “I went to Portfolio Night at school where kids show their parents around the classroom to look at their work hung on the walls,” she writes. “I looked down the entire time so no one could catch my eye for fear of breaking down. I hope they understood.”

Not every mother’s mourning will be as widely noted as Sandberg’s (within two hours, it had been shared more than 18,000 times), but at least her public declaration of vulnerability and loss might make less connected widows feel less alone. 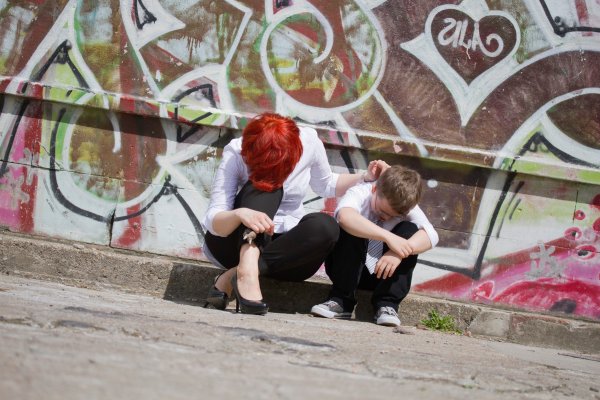 'Helicopter Parenting' Hurts Kids Regardless of Love
Next Up: Editor's Pick