This week President Barack Obama suffered a serious rebuke. Congress sent the president a bill that he signed that tells him his illegal bulk collection of phone records must end.

Apologists for collecting all the phone records of all Americans all of the time now belatedly say they are OK with ending the bulk collection program. They want you to know that your records are not really protected by the Fourth Amendment. They are only doing you a favor by granting you this reform.

Former Director of the National Security Agency and Central Intelligence Agency Michael Hayden writes in TIME that the law is clear. According to Hayden, your records—once held by the phone company—have no Fourth Amendment protection. Hayden writes: “The controlling legal authority here is a Supreme Court case decided in 1979, Smith v. Maryland, where the court held that metadata is not, repeat not, constitutionally protected.”

I think the Supreme Court has not yet caught up to an era in which one keeps one’s papers in a cloud, not a castle.

In 1979, the Supreme Court ruled 5-3 in Smith v. Maryland that a few days worth of phone records for a single individual were not protected by the Fourth Amendment. The NSA today, though, collects hundreds of millions of phone records from hundreds of millions of Americans without an individualized warrant. I hardly think Smith v. Maryland contemplated this vast dragnet.

The justices who dissented in Smith v. Maryland, though, were amazingly prescient and on target. Justice Thurgood Marshall—who disagreed with the opinion of the court—wrote that he didn’t share the assumption that customers would “typically know” that a phone company tracked calls internally—and that even if they did, there’s no way individuals would expect the general public or government to be privy to such records.

Privacy, Justice Marshall argued, is not a “discrete commodity, possessed absolutely or not at all.” Citizens who disclose information to a bank or a phone company with a specific intention for business, Marshall maintained, have a reasonable expectation that this information will not be released to outside entities.

Justices Potter Stewart and William J. Brennan also expressed their belief that phone records deserved protection, writing in their dissent that they were ”not persuaded that the numbers dialed from a private telephone fall outside the constitutional protection of the Fourth and Fourteenth Amendments.”

Stewart and Brennan maintained that a private citizen at home has an assumption of privacy regarding whom he or she contacts, and a constitutional right to privacy. “The numbers dialed from a private telephone—like the conversations that occur during a call—are within the constitutional protection,” Stewart and Brennan wrote. “The information captured by such surveillance emanates from private conduct within a person’s home or office—locations that without question are entitled to Fourth and Fourteenth Amendment protection.”

The numbers dialed are “not without ‘content,’” they argued—and despite that phone books are in the public domaine, most customers would not want their call log revealed to the world. “This is not because such a list might in some sense be incriminating, but because it easily could reveal the identities of the persons and the places called, and thus reveal the most intimate details of a person’s life,” they argued.

If the government has unrestricted access to the call logs of individuals without probable cause, Justice Marshall feared the suppression of speech would “impede certain forms of political affiliation and journalistic endeavor that are the hallmark of a truly free society.” Here Marshall was incredibly prescient to be suspicious of government efforts to track anonymous sources. Records of outgoing phone calls and phone numbers, Marshall concluded, deserve protection equal to speech.

And if law enforcement officials deemed privacy speech necessary because of reasonable suspicion, Marshall insisted that telephone companies disclosed any secure information otherwise inaccessible to government only when presented with a warrant.

General Hayden knows full well the powerful and invasive nature of metadata. Hayden is so confident of the “truth” discerned from metadata that he once remarked that “we kill people based on metadata.”

If so, we should be duly alarmed that metadata is collected in bulk and nothing in the Patriot Act prevents the government from using data collected in this less than constitutional way from being used in prosecuting domestic crime.

In fact, the section of the Patriot Act that authorizes the government to legally search and seize properly without telling the owner right away, is used 99.5% of the time not to prosecute terrorists, but to prosecute Americans for domestic crimes.

General Hayden tells us he is “willing to give the USA Freedom Act a try.” But that is only after the intelligence community is forced to admit that they lied about the very existence of bulk collection. My guess is that their easy acquiescence to transferring the bulk collection from the government to the phone companies is somewhat disingenuous since no reform would have ever been possible but for Edward Snowden revealing that the intelligence community was lying to Congress.

I, for one, will remain constantly vigilant of a government that admits its transgressions of liberty only when they are caught lying. 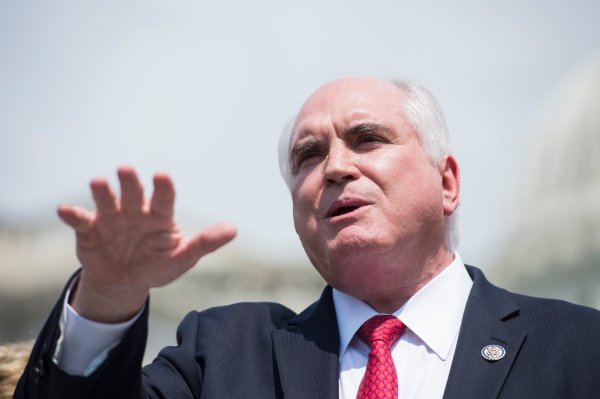 Rep. Mike Kelly: Why Republicans Should Support ‘Fast-Track’ Authority for Obama—and Congress
Next Up: Editor's Pick