On December 2, 2010, the Zurich Exhibition Center was so packed with people waiting to hear who would host the World Cups in 2018 and 2022 that Qatar’s World Cup committee chairman Hassan Abdullah al-Thawadi could hardly see over the crowd. FIFA President Sepp Blatter opened the envelope and announced that this tiny, blisteringly hot, non-soccer-playing nation would host the 2022 tournament. The Qataris in the room went wild but Thawadi said he was so stunned it took him a few moments to react. “I assumed we would lose to the U.S.,” he said in an interview in 2013, in Qatar’s capital Doha,. “I had thought, ‘okay, we would showcase to the world what we could do,'” he said. “We believed we had a very compelling story.”

Qatar indeed had a compelling story — and that story is now embroiled in the biggest sports scandal in many years. Switzerland last week opened an investigation into whether the awarding of World Cup hosting rights to Qatar for 2018 and to Russia for 2018 involved buying the votes of some FIFA delegates and the U.S. has indicted nine FIFA executives and five others on charges of money laundering and racketeering.

It is not yet clear what prompted Blatter to quit, just days after vowing he would not. He said on Tuesday he would bow out “to focus on driving far-reaching, fundamental reforms.” FIFA, he added, “needs a profound overhaul.”

With FIFA in turmoil and Blatter saying he will resign, the fierce battle over FIFA’s future direction now comes to rest on the fate of Qatar and Russia’s World Cups. For many of Blatter’s fiercest critics, whether or not those 2018 and 2022 World tournaments go ahead will indicate how serious FIFA is about ending corruption. “If I was the Qatari organizers I would not sleep very well tonight,” England’s soccer chief Greg Dyke said on Tuesday. “I think if the evidence comes out which shows the bidding processes were above board that’s fine. If it shows they were corrupt obviously the bids should be re-done. It’s as simple as that,” he said.

It may not be that simple, however to scrap Russia and Qatar’s World Cups and there will be major political battles over any decisions to move them. After last week’s arrests, Russian President Vladimir Putin, a close ally of Blatter, accused the U.S. of using “methods to achieve their selfish aims and illegally persecute people.” And in a similar fashion Qatar Prime Minister Sheikh Hamad bin Jassim bin Jaber al-Thani told Fox News this week that his country was being unfairly criticized. “Is it because it is an Arab, Islamic, small country? That is the feeling of the people in the region.”

Then there is the financial hit that switching venues would entail. For Russia and Qatar losing the World Cup would be disastrous. Each country has staked a good part of its national prestige on the event and there are billions of dollars in investments in play. Deep in recession and struggling with Western sanctions and low oil prices, Russia expects to spend about $20 billion building infrastructure and stadiums. “The 2018 World Cup is one of the main public investment projects for the next three years,” the Bank of America in Moscow wrote in a note to analysts last Wednesday. Qatar too has banked hugely on its World Cup, and expected to spend about $200 billion over a 12-year period, including its new $17.5-billion international airport, a multibillion-dollar rapid-transit system, and giant FIFA-approved stadiums, all air-conditioned.

Cancelling Russia’s World Cup would entail fairly rushed decisions, since the tournament’s lineup of teams begins this summer. “It is too late to change it,” said Simon Johnson, a London lawyer who led England’s losing bid to host the 2018 World Cup. “But 2022 is another matter.”

Corporate sponsorship is another issue. Advertisers have already expressed concern about splashing their logos across players’ uniforms and FIFA stadiums, in the midst of corruption allegations. After last Wednesday’s arrests, Coca-Cola, a major FIFA sponsor, said the scandal “has tarnished the mission and ideals of the FIFA World Cup,” while Visa, another big FIFA partner, said that unless FIFA underwent “swift and immediate” reforms, the company “will reassess our sponsorship.”

Campaign groups have continued pushing companies to pull their sponsorship from the Qatar tournament, convinced it is the only form of pressure strong enough to force changes in Qatar’s treatment of construction workers. About 1,400 mostly South Asian migrant workers have already died while building World Cup infrastructure. “Our main concern is not removing Qatar,” says Stephen Russell, coordinator of the London group Playfair Qatar. “We want leadership with the guts to threaten Qatar to remove the World Cup.”

Russell said he believed Blatter had opted to stay on at least until December, in order to ensure that Qatar does not lose its World Cup. “By the time you get to next March, more of the stadiums will have been built,” he said.

Nonetheless, the potential for sponsors to bail out of FIFA is still there, as stories of grim working conditions continue to emerge from Qatar. Russell said Playfair and other groups were beginning to talk to companies about their involvement. “Now there are very serious allegations of corruption along with very serious allegations of worker abuse,” he says. “It only takes one of them to say, ‘this is no good we’re getting out of there,'” he said. “From that point, you can target some of the others which are likely to go.” 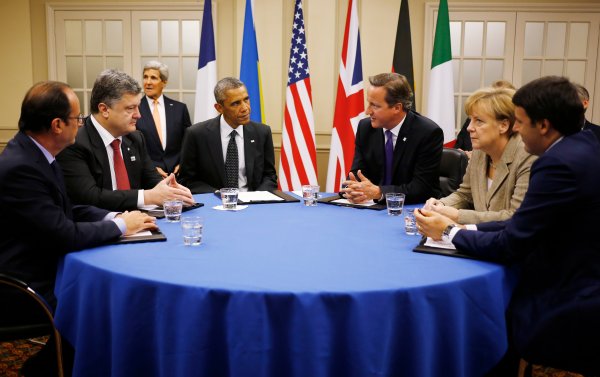 America Isn't the World's Most Respected Country. But It Is a Superpower
Next Up: Editor's Pick