Cameron Crowe has addressed the criticism surrounding the racial background of Emma Stone’s character in the film Aloha.

The director posted an essay on his website in which he apologized for casting Stone in the role of Allison Ng, who is described in the film as a quarter Asian and a quarter Hawaiian.

“Thank you so much for all the impassioned comments regarding the casting of the wonderful Emma Stone in the part of Allison Ng,” Crowe wrote. “I have heard your words and your disappointment, and I offer you a heartfelt apology to all who felt this was an odd or misguided casting choice.”

According to Crowe, he based the character on a real-life, redheaded woman from Hawaii who always felt compelled to over-explain her heritage.

Crowe disavowed Stone of any responsibility in the controversy, crediting the actress for her “tireless research” and adding, “I am the one to blame.”

“I am grateful for the dialogue,” the director continued. “And from the many voices, loud and small, I have learned something very inspiring. So many of us are hungry for stories with more racial diversity, more truth in representation, and I am anxious to help tell those stories in the future.”

Crowe also wrote that, since the film was first mentioned in Amy Pascal’s leaked email threads from the Sony hack, Aloha has “felt like a misunderstood movie.” Pascal’s emails revealed that she took issue with the project’s difficult production.

Aloha, which opened in theaters Friday, stars Bradley Cooper as a defense contractor who falls for an Air Force pilot (Stone) in Hawaii. The film currently has an 18 percent approval rating on review aggregate site Rotten Tomatoes.

Read next: Here’s the First Look at The Hunger Games: Mockingjay — Part 2 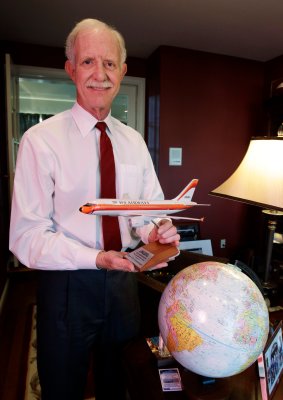 Clint Eastwood to Direct Biopic of 'Miracle on the Hudson' Pilot
Next Up: Editor's Pick