Director Ramin Bahrani on His Housing Drama 99 Homes: It's a 'Thriller With a Humanist Heart'

At some point during the process of writing 99 Homes, writer-director Ramin Bahrani turned to his co-writers and asked, “Did you realize we were writing a thriller?” Bahrani, who had set out to write a script exploring the human cost of the housing crash of 2007-2008, hadn’t initially approached the project that way—but unquestionably, that’s what the film was becoming.

The trailer for 99 Homes introduces a mother-son-grandson family unit, with Laura Dern and Andrew Garfield at the helm. After the family gets evicted in traumatic fashion and moves into a motel, Garfield makes, in Bahrani’s words, “a deal with the devil.” He goes to work for the man who evicted his family, played by Michael Shannon, for a chance at earning enough to get a more permanent roof back over their heads.

“Homes are so important to our lives,” Bahrani tells TIME. “ They’re where our memories are, where our families are, where we lay our heads down at night.” He wanted to understand how the family that might have been your neighbors ends up living in a motel. Bahrani wasn’t interested in portraying bankers in suits in closed-door boardroom meetings. His aim, he says, was “to take the large ideological ideas—be they class, economics, wealth inequality—and put them into real human beings on the ground.”

For his setting, Bahrani chose Orlando, one of the cities at the epicenter of the subprime mortgage crisis. He immersed himself in all aspects of the housing market, talking to fraud attorneys, real estate brokers and wealthy developers. He saw families get evicted, becoming trespassers in what were once their homes. He attended “rocket dockets,” so called “because in 60 seconds, they decide your fate, and it’s usually not good.” Between the scams, the corruption and the ubiquity of guns, he was blown away by what he found.

But rather than create a black-and-white morality tale, Bahrani focused on the moral ambiguities of fending for oneself and one’s family within a broader system that’s rigged in favor of the big fish. “On both sides of the fence, a lot of the policies have been to make the very wealthy wealthier,” Bahrani explains, “at the expense of the middle class and people below the middle class.” He hopes to spark a conversation about what’s not working anymore, why it’s not working and how we might do better.

“People who have seen the film can’t believe the emotional ride of what it means to be evicted,” Bahrani says. “This is an emotion that’s beyond a statistic or a news report.”

99 Homes is slated for release September 25. 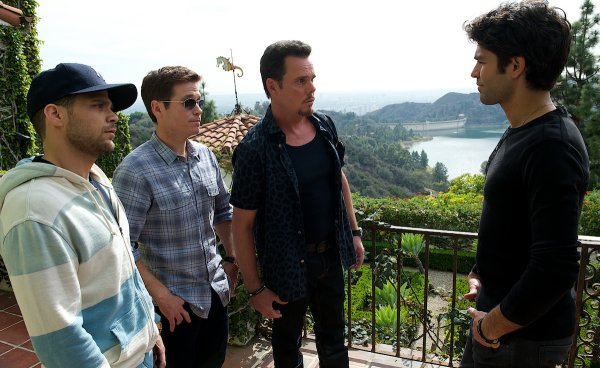 What TIME Said About 'Entourage' in 2004
Next Up: Editor's Pick