The National Security Agency will lose the ability to collect and store virtually all of American phone records, after the U.S. Senate voted 67-32 Tuesday to reform the secret intelligence collection programs revealed in 2013 by Edward Snowden.

The Senate voted to pass a compromise version of the USA Freedom Act, a bill that has already passed the House, with the support of President Obama, who signed the measure into law Tuesday night. Under the new law, the U.S. government would stop collecting the phone records, showing date, time and numbers connected. Instead, telephone companies will be required to keep the information, which can then be queried with a court order by intelligence and law enforcement professionals.

Senate leaders, including Majority Leader Mitch McConnell, who called the vote a “resounding victory for those who plotted against our homeland,” had hoped to resist the House reforms. But McConnell failed to schedule enough time to debate a different bill before several provisions of the Patriot Act, including the phone records program, expired on Sunday night. “He put us in a position to get us something no worse than the Freedom Act,” said Republican Rep. Justin Amash of Michigan.

McConnell scheduled votes on several amendments to the Freedom Act Tuesday that would have limited the reforms, but they all failed.

Nonetheless, many civil libertarians, including Amash, also opposed the Freedom Act for not going further in limiting the ability of court orders to request large numbers of documents. Under the Freedom Act, requests for information can be made based on a “specific selection term,” which can be an individual, association or an organization, a provision that opponents fear the intelligence community will interpret to once again gather vast amounts of information.

At issue throughout the debate was the history of the specific telephone-record program. It was permitted under the 2001 U.S.A. Patriot Act under a vague provision that allowed the government to request “tangible things” including books, records, papers and documents for an investigation into international terror or clandestine intelligence. Until the Snowden leaks, U.S. officials had concealed the fact that this provision was used to collect records of virtually every phone call made in America.

Asked in 2013 if the NSA collected “any type of data at all on millions or hundreds of millions of Americans,” National Intelligence Director James Clapper falsely answered “not wittingly,” in an unclassified Senate hearing. Snowden later said this deception was a major reason for his decision to leak classified material.

The Senate vote ended a tense three days in the Senate, in which Senators arrived home over the weekend only to be forced to stand by as Kentucky Sen. Rand Paul, a contender for the Republican presidential nomination, obstructed movement on a last-minute effort to pass a short term extension to several intelligence authorities so that the Senate could craft its own bill.

The rebellion of Paul, who forced the expiration of several intelligence gathering powers Sunday night in protest, forced McConnell to act fast to reinstate the authorities. Paul’s procedural moves were able to delay passage of the bill, but only for a couple days.

In the end, he voted against the final bill, along with Florida Sen. Marco Rubio and Vermont Sen. Bernie Sanders, who are both also running for President. Republican Ted Cruz voted for the reforms.

Sen. Lindsey Graham, a Republican from South Carolina, who was traveling at the time of the vote, said he would have voted against the reforms. Graham also criticized Paul’s tactics. “There are lines I don’t cross, within my party or without,” he told TIME. “To me, he crossed the line here. He put the country at risk unnecessarily.” 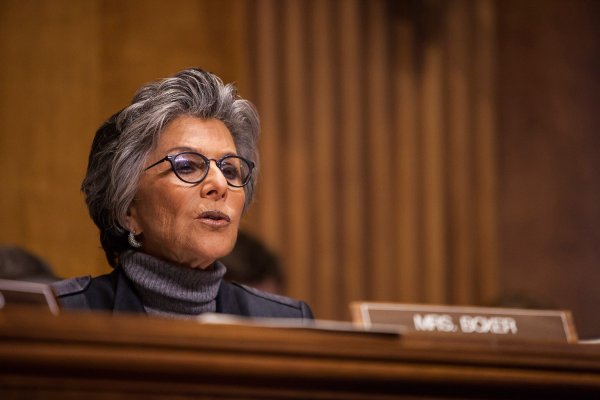