Now It's Harder than Ever to Be 'BPA Free': Report

Camelback brand water bottles that are free of the controversial carbonate plastic bisphenol-a (BPA), one of the most widely used synthetic chemicals in industry, hang on display at an outdoor supply store on April 16, 2008 in Arcadia, Calif.
David McNew—Getty Images
By Justin Worland

Bisphenol A, better known as BPA, has inspired fear in the minds of the health conscious ever since researchers first expressed concern that the chemical may disrupt the human endocrine system in 2008. Now, more than a quarter of food brands offer at least some of their products in BPA-free packaging, according to a new study.

But the research, published Wednesday by the Environmental Working Group (EWG), also demonstrates why people buying BPA-free products may not be getting the product they think. For one, many BPA replacement chemicals may not be any better than BPA itself. Even worse, some products with BPA-free labels may actually do contain BPA due to lax regulation of packaging manufacturers.

“People should not be eating BPA. It’s a known toxin,” said Renee Sharp, EWG head of research. “But at the same time we don’t know a ton about the alternative chemicals.”

Researchers surveyed companies that manufacture more than 250 food brands for the study and found that 12% used BPA-free cans for all canned goods, 14% used some BPA-free cans and 31% used exclusively BPA-lined cans. The remaining 43% did not provide adequate data. Amy’s Kitchen, American Tuna and Tyson Foods are among the companies that have eliminated BPA entirely.

While EWG got clear answers from most companies about whether they used BPA in their cans, that the companies that say they did switch to BPA free offered only “a vague description” or provided no information at all about what replaced BPA in their packaging, according to the report. The lack of transparency concerns some health experts because early evidence suggests that some alternatives like Bisphenol S and F, known as BPS and BPF, may have similar negative effects on the human body.

Despite a lack of transparency, EWG researchers say that it’s worth avoiding BPA even if we don’t fully understand the alternatives. “If you know something is bad, you don’t want to be eating it,” said Sharp. “I do think that the companies that are trying to do the right things deserve props.”

Still, it’s hard for consumers to know exactly what the BPA-free label means. With little oversight, packaging suppliers don’t necessarily provide food manufacturers with products that meet a BPA-free standard, even if they slap on a BPA-free label. EWG researchers hope the U.S. Food and Drug Administration will set a standard of fewer than 0.5 parts per billion of BPA in food contents, said EWG database analyst Samara Geller.

“Companies are putting that label on the can, but we would like to see that mean something for consumers,” she said.

So what do you do if you want to avoid BPA entirely? Good luck. 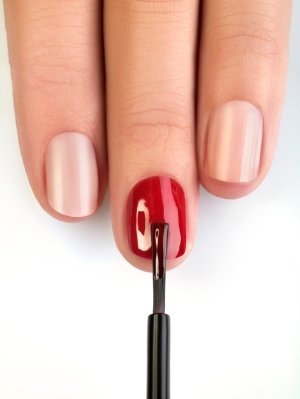 How Working With Nail Polish Hurts Manicurists' Health
Next Up: Editor's Pick