Snapchat Just Released its Most Useless Product Yet

Who says Snapchat doesn’t have a way to make money?

The instant messaging startup is selling plush toy versions of its impish mascot ghost. And yes, the character has a name: “Ghostface Chillah,” after the Wu-Tang Clan member Ghostface Killah.

“He’s a silly dude,” Snapchat CEO Evan Spiegel once told Business Insider, revealing that he drew the freaky phantom himself.

The toy is recommended for people ages 5 years and up. Guess the social media company is building its user pipeline—because remember, kids: “Snapchat is intended for people who are at least 13 years old. Persons under the age of 13 are prohibited from creating Snapchat accounts.” (Via Snapchat’s terms of service.)

For everyone else, there’s SnapKidz, a lightweight version of the app designed for children.

Then again, at the time of writing this post, it looks like the other Amazon customers who viewed the pair of plushies are also interested in recent books about Elon Musk and Bitcoin. So maybe the target demographic skews a bit older.

For a deeper dive into the world of the ephemeral photo-sharing app, read this Snapchat feature from the January 13, 2014 issue of Fortune magazine. 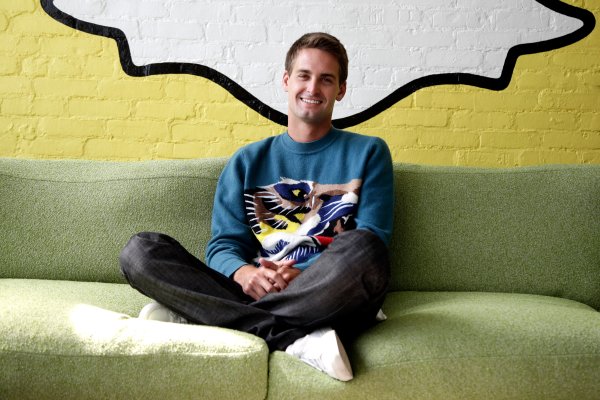 'We Need to IPO,' Says Snapchat Founder
Next Up: Editor's Pick