You Asked: Can I Scrape Mold Off of Food and Eat It?

Nobody wants to waste food. So when you see something hairy in your cream cheese or suspicious spots on your bread, it’s tempting to scrape the mold away and chow down. But in most cases—including the two just mentioned—munching moldy food is a bad idea, says Kristin Kirkpatrick, a registered dietitian and wellness manager at Cleveland Clinic.

Kirkpatrick says that when visible mold is present, its tentacles—called “threads”—have likely penetrated deep into your food, contaminating even those parts that appear to be mold-free.

The health risks of mold exposure are many. “Mold can produce toxic substances, called mycotoxins,” says Katie George, a clinical dietitian at the University of Kansas Hospital. These toxins can cause respiratory problems, allergic reactions and illness. George says aflatoxin, a specific type mycotoxin found in nuts and grains, can even be cancer-causing.

Mold is usually easy to spot. It often appears as a blue or green discoloration, which can grow a hairy coat if left long enough, Kirkpatrick says. If you’re examining foods in jars—things like pasta sauce or salsa—it’s best to check the underside of the lid and rim of the container for suspicious growths.

Just don’t sniff your foods, Kirkpatrick warns, which could lead to you inhaling mold spores. If you’re worried about mold but don’t see any growths, use common sense. “If the food doesn’t look the way it normally would, and especially if it seems moisture-soaked, toss it,” Kirkpatrick says.

The exceptions: Hard block cheeses like parmesan, cheddar or Swiss. “With those, the mold generally won’t penetrate deep into the product,” Kirkpatrick says. But don’t start scraping, which can release mold spores into the air or allow them to spread to your countertops or other foods. The only safe way to remove that mold is to cut away an inch of cheese all the way around the spot, she says. “You’ll probably cut away some safe parts, but that’s a good rule of thumb.”

A similar rule applies to some super-dense meats, like hard salami or cured ham. If mold is present, Kirkpatrick says you can cut it away and still enjoy these meats. But again, avoid scraping.

She also advises tossing the moldy bits in your trash—not your sink, where they could release spores or be splashed onto nearby countertops or dishes. Be sure not to use the same knife to prepare food that you used to remove the mold, too.

If you want to cut down the risk of mold in the first place, make sure you keep the inside of your fridge clean, George says. If bits of food or spilled condiments sit for weeks or months, the mold they harbor could spread to other foods—even fresh stuff. She also recommends keeping every food covered in your refrigerator to avoid cross-contamination.

Also, toss any prepared foods—things like casseroles or dinner leftovers—after two days. “Forty-eight hours is probably pretty conservative,” Kirkpatrick says. “But why take the chance?” Playing it safe is especially important for people with weakened immune systems, she says.

Her final piece of advice is probably your best course of action when it comes to moldy food: “When in doubt,” she says, “throw it out.” 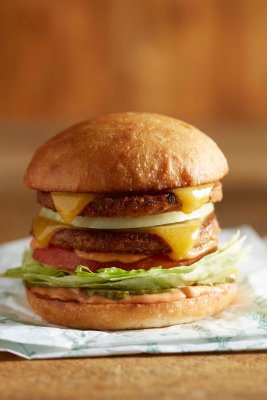 Amy's Kitchen Is Starting a Vegetarian Drive-Thru
Next Up: Editor's Pick