Mike Huckabee joked earlier this year that if transgender acceptance had been around when he was growing up, he would have pretended to be transgender in order to shower with the girls after gym class.

While addressing the 2015 National Religious Broadcasters Convention in Nashville in February, Huckabee warned of the dangers of letting transgender people into gendered spaces. “We are now in city after city watching ordinances say that your 7-year-old daughter, if she goes into the restroom cannot be offended and you can’t be offended if she’s greeted there by a 42-year-old man who feels more like a woman than he does a man,” he said, in remarks first reported by Buzzfeed.

Then he joked: “Now I wish that someone told me that when I was in high school that I could have felt like a woman when it came time to take showers in PE. I’m pretty sure that I would have found my feminine side and said, ‘Coach, I think I’d rather shower with the girls today.’”

Even though they’re from February, Huckabee’s comments are circulating in the aftermath of Caitlyn Jenner’s Vanity Fair cover, which is being seen as a radical moment of acceptance for the transgender community.

In 2013, Huckabee also expressed skepticism at rules that allow transgender students to use different bathrooms while he was hosting his show on Fox News. “If the child—a boy—says, you know what, today I really am feeling my girl’s side, he gets to go shower with the girls when he’s 14,” Huckabee said. “I’m just thinking of all the 14-year-old boys I went to school with, and how many of them would have awakened with that revelation.” 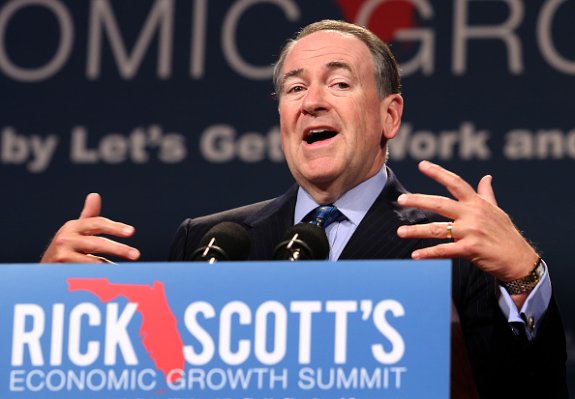 Huckabee Aims for Seniors in Florida
Next Up: Editor's Pick