In recent months, much has been made of the Olympic athlete formerly known as Bruce Jenner, now called Caitlyn, and her perceived use of the media to further both transgender visibility and an agenda of self-interest. There’s been a sense of bad faith surrounding Jenner’s rollout of the information about her gender transition, both because of her connection to the media-savvy Kardashian family and because of the timing of an announcement of Jenner’s own forthcoming documentary series.

Today’s revelation of the July cover of Vanity Fair, on which Jenner appears for the first time as herself, probably won’t silence those rumblings. But for those willing to presume the best of Jenner, it’s more than a brave act—it’s a revolutionary one.

Jenner is by a mile the most famous person to ever transition in public, and she’s shown the public her female self in the brashest way possible. She wears a revealing white corset, her hair glamorously tousled; the image will appear on every newsstand in America. Is this using the media to achieve Jenner’s own ends? Of course! No one appears on a magazine cover to get more privacy, strictly speaking. But the media has been the ocean in which Jenner has swum for the majority of her life since becoming the perceived face of American masculinity in her late 20s. Is it so tremendously shocking that she’d want to correct the public record in as memorable a manner as possible, even if it’s just to decisively dismiss the “Bruce Jenner” image?

MORE: Here’s How Vanity Fair Kept the Caitlyn Jenner Cover From Getting Scooped

The cover itself is artfully done. The fact is that Jenner is now that rare 65-year-old woman to have appeared in lingerie on a major magazine cover; Vanity Fair is forcing the reader not just to embrace her achievement in the abstract, but to confront the reality that Jenner is a real person who has undergone a real physical change. Those who supported Jenner as she admitted her hopes and dreams to Diane Sawyer who are made uncomfortable by this cover photo must ask themselves why.

There’s something moving going on, too, in Jenner’s self-presentation. The name she’s chosen, emblazoned across the cover in a headline, isn’t just a name beginning with a “K-” sound but not exactly a “K.” (Sorry, Kim, Kourtney, and Khloé.) It’s also a name that reached its peak popularity in the 1990s, one that was not in use when Jenner was born. Jenner, boldly willing to wear undergarments and a smile on the cover of Vanity Fair, is as much a young person as anyone else named Caitlyn; she’s only just now discovering who she is in the public eye.

Jenner’s willingness to take the public along with her isn’t just a necessary corrective to years of misinformation about “Bruce Jenner.” It’s welcome, and it’s enlightening.

Read next: How Transgender People Choose Their New Names 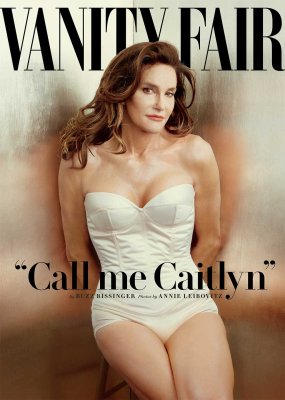