Why Lindsey Graham Matters in the 2016 Race

South Carolina Sen. Lindsey Graham launched his campaign for the presidency Monday with an announcement speech that promised to restore a muscular foreign policy in a dangerous world.

“I want to be president to defeat the enemies trying to kill us, not just penalize them or criticize them or contain them, but defeat them,” Graham said, standing on the Central, S.C., street where he was raised in the back room of a pool hall and liquor store. “I have more experience with our national security than any other candidate in this race.”

Graham, 59, is the ninth Republican to enter the race, a field that may nearly double in size by the Iowa caucuses. And he is unlikely to emerge from the crowded primary pack.

A rounding error in the polls, Graham lacks a national profile or fundraising network and suffers from a sour relationship with the grassroots activists who dominate the GOP presidential primary. In an age of political combat, he is one of Capitol Hill’s few surviving dealmakers, willing to buck the base to partner with Democrats on issues like immigration and environmental legislation.

But even if he won’t become President, Graham will be a player in the chase for the White House: as a hawk in a party with renewed focused on the threat of Islamic terrorism; as an agitator whose folksy style masks a taste for skewering his rivals; and as a potential kingmaker, whose base of support in the nation’s first southern primary state gives him the potential to tip a tight contest with an endorsement.

Graham previewed the themes of his campaign Monday with an announcement speech that focused heavily on national security. “We’ve made some dangerous mistakes in recent years. The Obama Administration, and some of my colleagues in Congress, substituted wishful thinking for sound national security strategy,” Graham said. “As President, I will make them small, poor and on the run.”

Just a year ago, such rhetoric would have set Graham apart in a party that has grown weary after more than a decade of continuous war. But the rise of the Islamic State, the spreading chaos in the Middle East and the prospect of a nuclear accord with Iran has helped the GOP rediscover its hawkish leanings. An election that once seemed destined to showcase the party’s surprising dovishness has transformed into a battle about who can be toughest on the terrorists.

Read More: How Lindsey Graham First Earned a Reputation for Bucking the GOP

The shift fits squarely in Graham’s wheelhouse. Recently retired after 33 years in the U.S. Air Force, he has the deepest military background of any 2016 GOP candidate. “Radical Islam is running wild,” he said Monday. “They have more safe havens, more money, more capability and more weapons to strike our homeland than anytime since 9/11. They are large, rich and entrenched.” But the party’s evolving foreign policy is a mixed blessing for Graham. Though no longer a lonely voice for foreign intervention, he may be a less influential voice now that he is no longer the only candidate promising to flex the nation’s muscles.

There is still no one in the Republican field who can match Graham’s gift for the crowd-rousing zinger—a talent that wins him a media profile bigger than his poll numbers. Graham often uses the spotlight to throw darts at his rivals. And most of the time, GOP Sen. Rand Paul is the target. “I think Sen. Paul’s record on [foreign policy] is frankly behind President Obama,” Graham told reporters recently. “If he’s the nominee of the party, I think we risk giving up the central issue of the 2016 campaign, which will be foreign policy.” If Paul’s campaign for the presidency picks up steam, Graham is poised to be the Kentuckian’s chief tormentor.

He’s also the only 2016 Republican who will contest a crucial primary on home turf. Last year Graham won a third term representing the Palmetto State, the first Southern state to hold elections in an increasingly Southern party. If his own campaign can’t gain traction by the time of the primary, he’ll be positioned to give someone else a critical boost.

Though few predict he’ll emerge victorious, Graham’s allies believe he has the potential to pull some surprises. He’s a canny operator from humble beginnings, with a proven ability to energize crowds and valuable ties to one of the party’s premier donors. And as a foreign policy candidate in what is shaping up as a foreign policy election, he’s likely to stay in the headlines for as long as he stays in the race.

“The world is exploding in terror and violence,” he told supporters in South Carolina Monday. It’s not sunny stuff. But these are the kinds of lines that could make Graham a factor in fearful times.

Read More: The Three Best Friends Who Ran for President 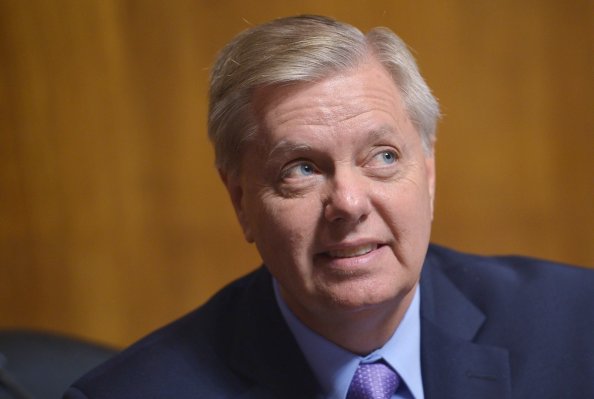 How Lindsey Graham First Earned a Reputation for Bucking the GOP
Next Up: Editor's Pick