Everything You Need to Know About Solar Impulse

The Solar Impulse 2, a plane attempting to fly around the world using solar power, was forced to land Monday in Nagoya, Japan due to inclement weather.

The experimental aircraft — flown and financed by Swiss businessman and pilot André Borschberg — is now two months into its quest to become the first solar-powered plane to circumnavigate the Earth.

Wait. Is that even possible?

Yes. But first off, it’s important to note that Solar Impulse’s trip around the globe isn’t nonstop. There are several scheduled stops along the way after the initial departure from Abu Dhabi in March. Solar Impulse has already made stops in Oman, India, Myanmar and China, where it took off from Nanjing on Sunday.

But instead of landing in Japan on Monday, Solar Impulse planned to land five days later in Hawaii as a pitstop during its trans-Pacific leg. After that, Solar Impulse plans to make stops in three U.S. cities before crossing the Atlantic and returning to Abu Dhabi by late July or early August 2015.

So how does this plane work?

Borschberg and another Swiss pilot, Bertrand Piccard, will take turns flying the plane during the roughly 10 legs around the world. They’re supported by a 60-person support team tasked with anticipating every possible scenario to ensure the plane’s proper function and safety.

During the day, the solar cells recharge the Solar Impulse 2’s lithium batteries, allowing the plane to fly at night. That said, the plane does depend on appropriate weather to ensure there’s enough sunlight for the solar cells to absorb.

Has anyone tried this before?

Yes — at least when it comes to building solar-powered aircraft. Back in the 1970s, an American alternative energy company called AstroFlight developed an unmanned experimental aircraft called the AstroFlight Sunrise. After four years of development, the Sunrise finally took off and flew over a military reservation in California, becoming the world’s first aircraft to fly on solar power.

Will my ordinary commercial flight be solar-powered some day?

Probably not any time soon. The Solar Impulse 2’s flight is made possible because the aircraft is so light. The technology isn’t yet ready to power heavier, passenger-packed planes — even if your next commercial flight was totally covered with the world’s most efficient solar panels, it still wouldn’t be enough to propel the plane.

Where can I catch a glimpse of Solar Impulse 2?

If you live near one of several stops, you might just catch a glimpse of it at a nearby airport. It’ll be tough, though: The plane only lands at night since winds tend to be lower, and it generally avoids periods when commercial flights are operating due to its long wingspan. 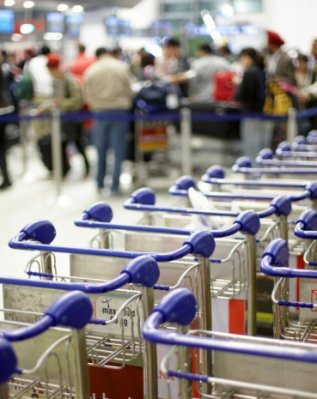 These Are the 10 Worst Airports for Summer Travel
Next Up: Editor's Pick