Tina Fey and Amy Schumer Kissed at the Peabody Awards

It was a big night for kissing at awards show podiums on Sunday.

At the Peabody Awards, the mouth-to-mouth involved recipient Amy Schumer and presenter Tina Fey. According to The Hollywood Reporter, Fey’s initial plan involved some Madonna-esque witchcraft. Fey said, per THR: “I really wanted to come down here tonight, and in a Madonna kind of way try to like feed off of her youth and maybe suck her soul out in a very awkward, staged lesbian kiss. But when I pitched that idea to Amy’s camp, they came back with such an immediate yes that it kind of grossed me out.”

Hopefully no soul sucking took place, and instead the swapping of saliva simply created an everlasting collaborative bond between the comic superheroes.

Meanwhile, Allison Janney was the kiss-instigator—the kisstigator, if you will—at The Critics’ Choice Television Awards, bestowing one upon James Corden after her win for Best Supporting Actress in a Comedy Series. “I didn’t mean anything by that other than just I just love this man so much,” Janney said. 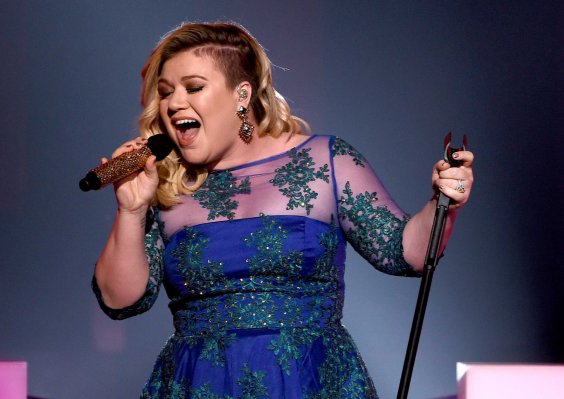 Watch Kelly Clarkson Sing a Karaoke Duet With a Young Fan
Next Up: Editor's Pick