One young mother is fighting back after a stranger criticized her for breastfeeding her child in public on Facebook.

According to mom Conner Kendall, a male stranger snapped a photo of her breastfeeding her young son at a T.G.I. Friday’s in Terre Haute, Indiana. The picture, which was taken without her knowledge, was then uploaded on Facebook on Instagram where the unidentified man asked mothers to weigh in on the appropriateness of breastfeeding in public.

“I went [sic] to know if this is appropriate or inappropriate as I’m trying to eat my Fridays, there are little kids around,” the man wrote along with the picture, according to a screenshot shared by Kendall. “I understand feeding in public but could you at least cover your boob up?”

“He snapped the photo and then put it up on social media (Facebook and Instagram), many of the comments that followed were nothing less than harassing and shameful to, not only me, but every past, present, and future nursing mother,” Kendall wrote in a lengthy Facebook post.

“I was really very hurt by this act, because I was in no way bothering him, so what gave him the right to shame me?”

Kendall decided to contact the stranger with a strongly worded letter, standing up for her right to breastfeed in public. She shared her letter on Facebook as well.

“You’ve shown your true colors to many and you’ve exposed others who are likewise simpleminded,” she wrote. “While you meant to come across as exposing a violation of your rights and the rights of others, you fell into your own hypocrisy. You violated the rights of not only me, but my child. Did you know it is illegal to share the pictures of minors without the expressed permission of their legal guardian? I get that you felt uncomfortable looking at my breasts. Here is a novel idea, don’t look at them.”

“I am also intelligent, I know all the facts about breastfeeding and I know what I am doing is best for my child,” Kendall continued. “I chose to do it not only because it’s rewarding, but because it is what is best for them. I am resolved, not only in my choice to breastfeed my child, but to do it whenever and wherever I want.

“You have given me a platform and a drive to advocate breastfeeding ferociously. You’ve inspired me into a call of action. Rest assured, there will be action. Not only by me, the one you violated, but others like me who feel you violated them and their rights. Those that you are degrading by shaming the act of feeding their child. How I pity those who would actually belittle a mother for taking care of her child.

According to Kendall, the man responded with what she called an “insincere apology.”

“It is not the fact that the picture was taken, or even that it was put on social media that bothers me. If he wanted a picture he should have just asked, I would have gladly smiled,” Kendall continued. “It is the fact that it was done so in a way that aimed at shaming my child and I, as well as every other nursing mother, for taking care of my baby.”

She ended her Facebook post with a special message, “ALL MOMMIES SHOULD BE ABLE TO FEED THEIR BABIES WHENEVER, WHEREVER, AND HOWEVER THEY CHOOSE!” 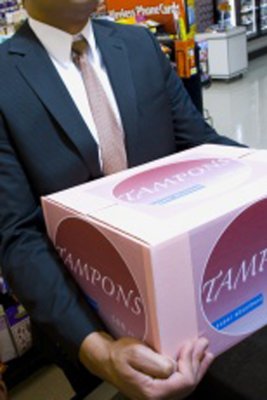 Imagine a World Where Men Have Periods
Next Up: Editor's Pick